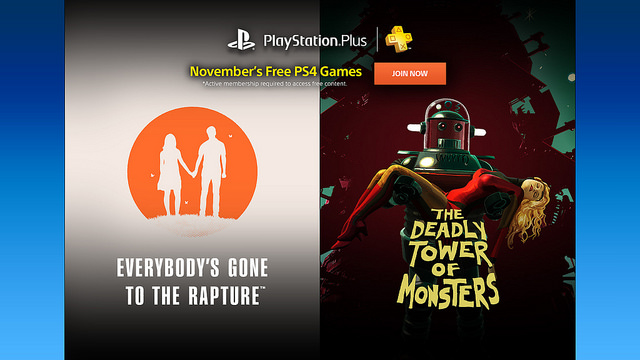 Gamers can now start planning their binge-playing schedules with the release of the official list of games for the PlayStation Plus free games service this November.

There is a total of six games coming to next month’s library including “Everybody’s Gone to the Rapture” and “The Deadly Tower of Monsters,” both for PlayStation 4. “Dirt 3” and “Costume Quest 2,” on the other hand, arrives on PlayStation 3. The last two, “Letter Quest Remastered” and “Pumped BMX+” will be available for PlayStation Vita with the ability to cross buy the former with PS4 and for the latter, PS4 and PS3.

Given that spooky season has officially arrived, some of the games are noticeably leaning towards the thriller and adventure side with “Everybody’s Gone to the Rapture” tackling the mystery of the sudden disappearance of the inhabitants of an old English town. Along the lines of this kind of gameplay is “The Deadly Tower of Monsters.” The title alone suggests that its gameplay is imbued with terrorizing features. It is a top-down shooter game inspired by classic science fiction movies.

Since the release of the list, the service’s subscribers have been flocking to the comments section of the article. The initial reaction to the set of new games is mixed with some open to trying new titles that they have not played before, while others are frustrated especially with the recent price hike of the program.

Meanwhile, there are players who were already able to sample a couple of the titles before they were even tipped to launch via the library and they gave brief reviews. Arguably, the games are quite a step down from last month’s set which offered a couple of well-known titles such as the remaster of the classic “Resident Evil” and even “Transformers: Devastation.” Luckily, for those who have not gotten their hands on the two aforementioned titles, they are still available to download up until the end of the month.