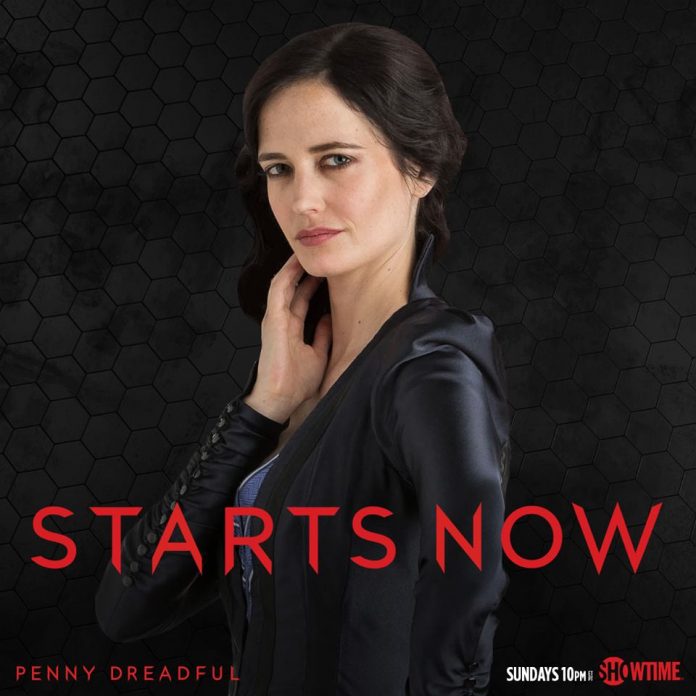 Showtime’s Gothic thriller-drama series “Penny Dreadful” is back for season 3, showcasing what could be a dark future for the series’ enigmatic ensemble.

After the premiere titled “The Day Tennyson Died,” picked up where the last season left off – with Vanessa Ives (Eva Green) depressed and isolated in Sir Malcom Murray’s (Timothy Dalton) empty London home, viewers may expect some of the characters from famous Victorian literature on their own journey before they are brought back together.

In an interview with Entertainment Weekly showrunner John Logan shares that taking the show into many different territories such as London, Africa, America, and the Arctic aims to have variations for the characters and the audience, “I thought it would be really exciting to see how they all functioned separately and were drawn together.”

He also teased that when it comes to the narrative, he promises Ethan (Josh Hartnett) will have a “final reckoning” with his demonic father played by Brian Cox later in the season. Moreover, Vanessa will be taking real steps to make herself better, “She has to find a way back into some faith faith in herself, faith in God, faith in her friends. So she attempts to heal her mind and her heart simultaneously.”

Logan said that she will rediscover her faith in two ways – first by seeing an alienist who is the early version of psychotherapist Dr. Seward (Patti Lupone) and second by having a romantic relationship with a zoologist, Dr. Sweet (Christian Camargo). With the latter in the picture, fans may expect a love triangle happening when Ethan returns from dealing with his demons and exploring his past.

On the other hand, Lily Frankenstein (Billie Piper) will wreak bloody vengeance to those who wronged her, “She has a lot of pain and she’s been savaged in many ways,” the actress told Digital Spy.

“Now she has this new-found purpose of recruiting fallen women – and she’s found this serious partner in crime to do that with. He has the means and the ways and the lifespan to see her quest through. They’re out to get some justice for the poor behaviour that some of those women had to suffer. It has a good spirit behind it, but ultimately it’s pretty aggressive – and some people will really pay for what they did,” Piper added.

Meanwhile, aside from Cox, joining the cast for the new run is Shazad Latif as Dr. Henry Jekyll. He will be introduced as an old school friend of Dr. Frankenstein (Harry Treadaway) who is half Indian and half British. It remains to be seen when will the viewers meet Mr. Hyde.

'Once Upon a Time' season 6 set to resume the battle...