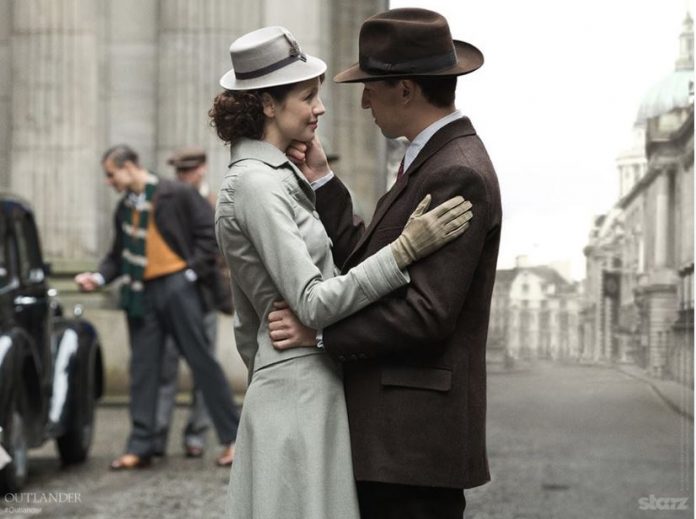 Droughtlander is still on as fans are waiting for the third season of “Outlander” to premiere on Starz. The cast and crew of the hit series are currently filming the upcoming installment in Scotland, but over the weekend, stars Caitriona Balfe (Claire) and Sam Heughan (Jamie) took a break from filming to attend the British Academy (BAFTA) Scotland Awards as both have been nominated for their work on the show.

Despite having the support of “Outlander” fans, Heughan did not win in the Best Actor in Television category, but Balfe did take the gong for Best Actress in Television. In her acceptance speech, the actress thanked executive producers Ronald D. Moore and Maril Davis for “taking a chance on someone who has never been on a TV set before.” Balfe also thanked her “two amazing husbands” on the show, who are played by Heughan and Tobias Menzies (Frank).

While fans are waiting for Claire and Jamie’s emotional reunion scene in season 3, viewers can expect to see more of Claire’s first husband in the new installment. The third season is based on Diana Gabaldon’s third “Outlander” novel titled “Voyager,” and while Frank was not featured heavily in the book, it appears that the show will make a few changes as the upcoming season will dive into Frank and Claire’s years together after her return from 18th century Scotland.

“They’ve expanded that end of the story a little bit, but they’ve done it well, very consistently,” said Gabaldon to TVGuide.

But those who are concerned that the show might stray too far from its source material needn’t worry, as the author, who has watched the first four episodes of season 3, said that Jamie’s scenes stay true to the book.

“Most of Jamie’s stuff, which is a lot of the first part, is done very straight from the book,” said Gabaldon. “It’s very recognizable, you might say.”

The show is expected to film the sea voyage scenes in early 2017 as part of the story will be set on the high seas and will see Jamie and Claire traveling to the Caribbean to look for his kidnapped nephew.

“Outlander” season 3 is slated to premiere in 2017 on Starz.