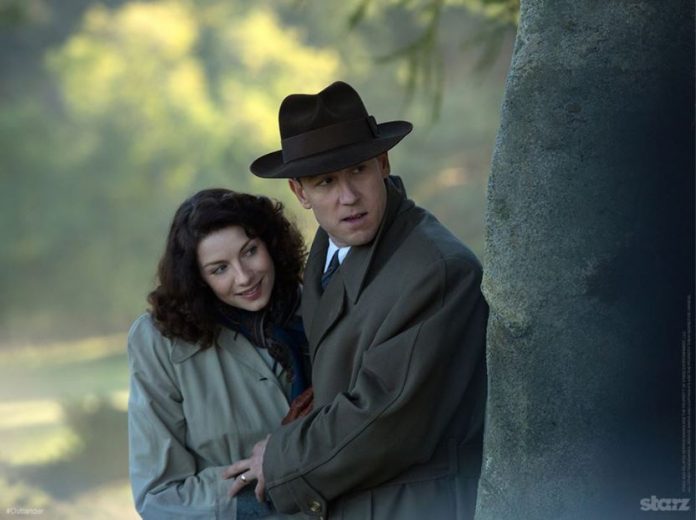 Production for the third season of “Outlander” is underway, and the stars of the hit Starz show have been spotted filming new scenes for the upcoming installment.

The University of Glasgow’s official Twitter account posted a behind-the-scenes look of “Outlander” filming on campus on Monday, Sept. 5. A fan who happened to be on campus at the time said that Tobias Menzies (Frank Randall/Jack Randall) and Caitriona Balfe (Claire) were on the set and that Balfe stopped to chat with a few fans. The fan also said that, at first, they were told that Sam Heughan (Jaime) was there, but later clarified that the actor wasn’t at the location.

“So apparently Sam wasn’t actually there but Caitriona came out after and was super nice and chatted with us, so beautiful as well,” said Twitter user Faayza Haq Trash.

The fan added that they were not allowed to take pictures “for spoiler reasons” and feels that it would be best not to mention what the actors were wearing in the scene.

Outlander TV News reports that a photo was posted on the microblogging site which sees Claire with a baby bump, which likely means that Balfe and Menzies could be filming a scene prior to Brianna’s (Sophie Skelton) birth. The university scene likely means that Frank’s time as a history professor will be seen when the show returns.

Claire’s return to 1968 was divided into two parts in season 2 of “Outlander.” The premiere saw her disoriented as she woke up in her own time, and she was also reunited with Frank in the same episode. Most of the season focused on Jamie and Claire’s time in 18th century Paris, and the season finale saw how Claire was forced to say goodbye to Jamie as she went through the stones. The finale also featured a 20-year time jump wherein Claire learned that Jamie is alive after the battle which took place at Culloden Moor.

It’s possible that part of season 3 will reveal what happened to Claire and Jamie during the time when they were separated. This means that fans will likely get to see Claire during her pregnancy and how she and Frank dealt with their awkward situation since she admitted that she was pregnant with another man’s child. The battle of Culloden will also be seen in the new installment as Heughan himself welcomed fans to season 3 in a short video taken on the set of “Outlander.”