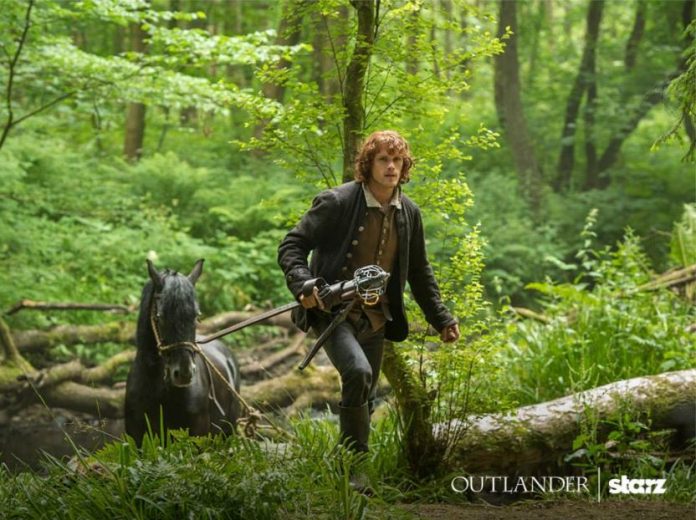 Production has started on the third season of “Outlander” as series star Sam Heughan (Jamie Fraser) has been photographed while shooting a battle scene in Cumbernauld, Scotland.

In pictures released by Just Jared, the 36-year-old actor has blood dripping down his face and chest. Other actors playing Scottish warriors and red-coated British soldiers can be seen taking a break in other photos published by the website. According to BBC, the scene was not filmed at the real Culloden Moor near Inverness, as the site is classed as a war grave. Instead, the battle scenes were filmed in a field at Greengairs.

The Battle of Culloden is a real-life event which took place on April 16, 1746, wherein a Jacobite force led by Bonnie Prince Charlie was defeated by a government army. In the Starz show, which is based on Diana Gabaldon’s “Outlander” novels, the battle was hinted at in the season 2 finale and served as the main reason for Claire’s (Caitriona Balfe) return to her own time through the stones of Craigh na Dun.

While Claire plans her return to the 18th century, Jaime will be seen fighting alongside the other Scots in season 3. As the next installment is based on Gabaldon’s third novel titled “Voyager,” it is expected that Jaime’s time in Ardsmuir Prison will also be featured on the show after the character survives the battle in Culloden.

Season 3 is expected to film in Scotland before switching to the Caribbean and North America. Showrunner Ronald D. Moore told the audience at the Edinburgh International Television Festival last week that the new installment will take the show to a whole new setting.

“There’s an extended journey across the Atlantic and then the story eventually goes to Jamaica, the Caribbean and ending up in the New World,” said Moore. Apart from the exciting voyage across the seas, the new season will also see a 20-year time jump, as well as an emotional reunion between Claire and Jaime.

'Bloodline' season 3 spoilers: Danny will continue to be a core...