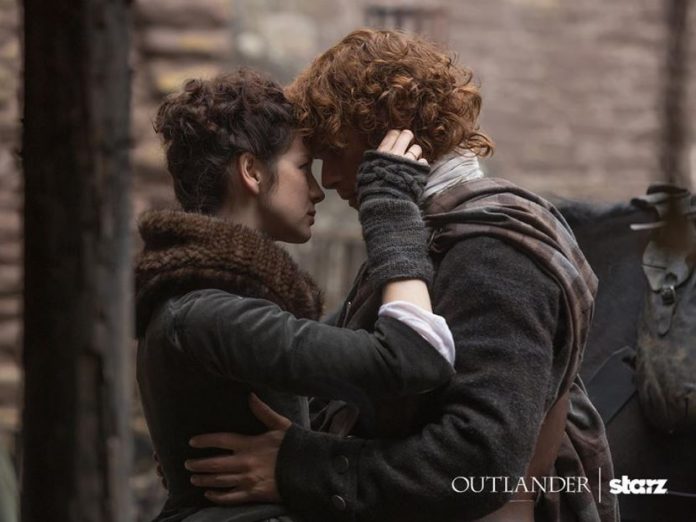 Production on the third season of “Outlander” is underway, and last week, executive producer Ronald D. Moore took to Twitter to answer a few questions about the upcoming season, revealing when they will shoot certain scenes for the new installment of the Starz series.

The producer said that filming is “off to a great start” and that they are “almost finished with block one.” Earlier this month, Sam Heughan (Jamie) was seen filming a battle scene in Scotland, while Caitriona Balfe (Claire) and Tobias Menzies (Frank) were spotted filming at the University of Glasgow.

It appears that Heughan and newcomer David Berry (Lord John Grey) have also shot a few Ardsmuir Prison scenes. The author of the “Outlander” novels, Diana Gabaldon, was asked by a fan if she has seen the shots of Jamie and John Grey at Ardsmuir, and Gabaldon tweeted, “I have, yes! They’re amazingly good.”

The third season of the Starz series is based on Gabaldon’s third “Outlander” novel titled “Voyager,” and the installment will see Jamie and Claire trying to live their lives apart from each other as they are now separated by time. Fans will see Claire back in her own time in the late 1940s, while Jamie carries out his prison sentence in Ardsmuir in the 18th century. The two will be reunited when Claire travels through time once more, and the pair will go on a sea voyage which takes them to the Caribbean, and later, the New World.

Moore was asked if they have figured out which ships to use for the third season, as it has been speculated that the show might borrow some ships from “Black Sails,” which is another show that airs on Starz. The producer said that they are still “considering our options in terms of where to shoot the ships” and that filming the voyage scenes “won’t be until 2017.” He was also asked if they have given any thought to having a 90-minute season 3 premiere, but Moore said it was “not in the cards” for the new season.

'Deadpool': 65 things to know about the new movie