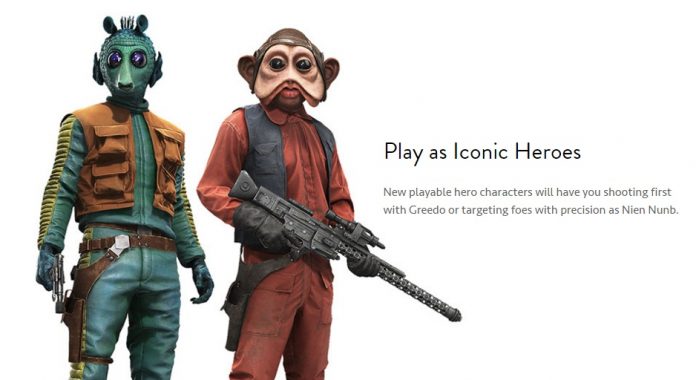 These heroes are confirmed to be Nien Nunb, a Sullustan rebel, and Greedo, the Rodian bounty hunter that was featured in the Cantina scene with Han Solo (Harrison Ford). These two new playable characters were previously teased in an image and were quickly spotted by eagle-eyed members of the “Star Wars” community. As it turns out, they were right. The Outer Rim DLC does include these two characters.

In addition, the upcoming expansion pack will also include two new maps, a new mode, and brand-new weapons. One of these maps is located in the industrialized world of Sullust where players can engage in battles at factories, manufacturing plants, and lava flows. The other map will take gamers to Tatooine for a closer range battle in Jabba the Hutt’s palace.

Meanwhile, the new weapons include the Relby V-10 rifle and the DT-12 blaster pistol. New Adrenaline Stim Star Cards, a Scatter Gun, and a Dioxis Grenade, will also be added with the new pack.

The upcoming DLC will also add Extraction as the new mode. This is a timed mode where rebels embark on a mission to successfully deliver a valuable resource shipment to their transport. Alternatively, those on the Empire side will need to thwart their efforts and stop the rebels from reaching the transport to win.

The “Star Wars Battlefront” Outer Rim DLC is included in the Season Pass which will set players back by $50. After Outer Rim, EA has scheduled three more DLCs, Bespin, Death Star, and an as-of-yet unnamed expansion pack, to release each month.

“Star Wars Battlefront” is available to players of Sony’s PlayStation 4, Microsoft’s Xbox One, and PC.