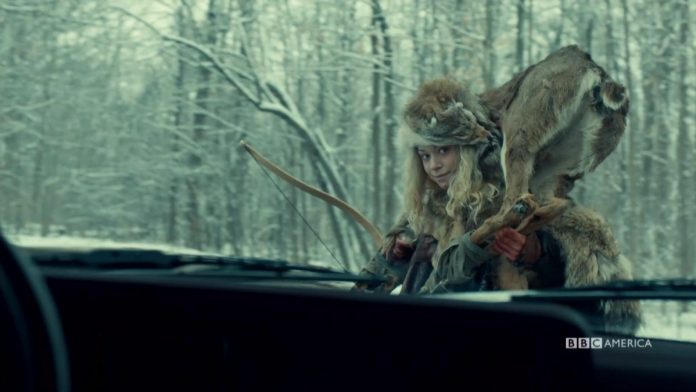 The recent big reveal of two characters’ comebacks are setting the tone for the upcoming finale of BBC America’s “Orphan Black” season 4.

The penultimate episode dubbed “The Mitigation of Competition” saw the long-awaited return of Helena (Tatiana Maslany) and Delphine (velyne Brochu). The former helped her sestra Alison and Donnie in a face-off with Neolution, meanwhile, the latter’s mysterious disappearance had also been lifted when it was revealed that she was indeed alive.

Talking to Entertainment Weekly, co-creator John Fawcett said that preserving the mystery was necessary, “As much as it’s made the fans crazy, it is part of the drama and the journey our characters have to go through to discover the truth.”

He also teased the concluding installment he directed stating, “It’s the finale, so of course let’s go out with guns blazing, and it’s big! I’m so excited to show people the end of this season. It’s a roller coaster, and I think there’s gonna be a lot of things that people aren’t expecting.”

Based on a preview for episode 10 titled “From Dancing Mice to Psychopaths,” what happened to Delphine will finally be revealed before the season wraps up.

The clip opens with Krystal talking to someone on the phone saying, “I have Intel about that French doctor,” who was previously seen to be shot at a parking lot. However, she said that she will not divulge any information regarding Delphine if they will not share to her what is up with her sisters, “I won’t tell you anything unless you tell me what’s really going on,” she demanded.

Meanwhile, a voice in the background ominously states, “Controlling the evolution is the ultimate power.” The video ends with Cosima’s nose bleeding, seemingly suggesting that her condition may be worsening.

Big Bang theory season 9: Penny and Leonard to tie the...