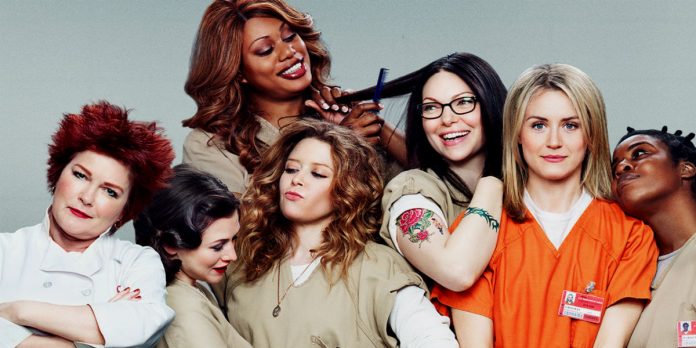 Netflix has released photos of the fourth season of “Orange Is the New Black.” Cosmopolitan posted these photos which provided updates, spoiling some scenes of the upcoming season.

Surprisingly, one photo leaked confirmed that Alex Vause (Laura Prepon) is still alive. Fans will have to wait for the new season to find out how Alex managed to survive.

Adding to the plot of the fourth season is the new friendship between inmates, Judy King (Blair Brown) and Poussey (Samira Wiley). In one photo, Brown is seen together with Wiley in a kitchen, laughing.

Conflicts are still evident in the show as another photo revealed Piper (Taylor Schilling) being overtaken by Blanca (Laura Gomez) in a duel. Season 4 will reveal the reason behind this fight once it premieres.

Meanwhile, another promotional image showed Kate (Kate Mulgrew) and Gloria (Selenis Leyva) appearing to be in good terms now, still as keepers of the kitchen.

Another unlikely friendship is evident in the photo where Big Boo (Lea DeLaria) and Pennsatucky (Taryn Manning) are seated side-by-side at the dining area.

“Orange Is the New Black” might likewise see a wicked scheme brewing up as Suzanne (Uzo Aduba), Taystee (Danielle Brooks), and Black Cindy (Adrienne C. Moore) were shown quietly discussing something inside their cell.

The synopsis of the fourth season was posted by Collider. The report mentioned how Jenji Kohan, creator of the drama series, described the show. According to Kohan, it is “thought-provoking, funny and evocative show” depicting the lives of women in the prison cell. Kohan also said that the fourth season revolves around “racial and economic tensions” going out of hand in Litchfield. The creator also added that fans can expect more “culture wars” in this upcoming season.

Catch “Orange Is the New Black” season 4 on Netflix on June 17, Friday.