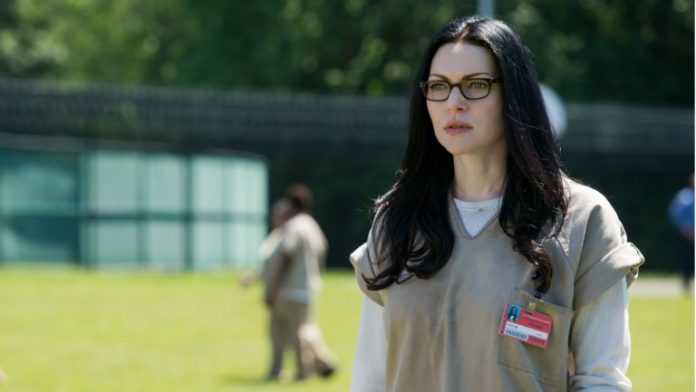 “Orange Is the New Black” is back for its fourth season, and one of the first reveals of the new season is that Alex Vause, played by actress Laura Prepon, is indeed alive following a major threat on her life during the end of the third season. Alex may also be developing budding relationships with her fellow inmates, though unlikely as it may have seemed in the past. Prepon also talked about her character’s relationship with Piper Chapman (Taylor Schilling).

“In season four there is a lot of Alex and Piper, it’s just a different dynamic,” said Prepon, in a recent interview with The Hollywood Reporter. “They always have that magnetic thing, but it’s more about how they’re both going through these crazy things. Their dynamic has kind of changed a little bit. It’s also like the Ross and Rachel thing [from ‘Friends’] where: you can’t always have them together. They have to breakup and get back together again, and breakup and get back together again. Alex and Piper are really different from Ross and Rachel, obviously, but it’s that thing of: You can’t keep the main relationship together, you always gotta keep it interesting.”

Meanwhile, for people who do not mind having to know major spoilers ahead of seeing the new season, fans should be warned that the season features the final appearance of a character one that was loved by fans throughout previous seasons of the show. This beloved character bites the dust in the most untimely, if not unfortunate, way possible.

Poussey, played by Samira Wiley, has been killed off in the fourth season. Poussey had been trying to calm down Crazy Eyes (Uzo Aduba) so that she wouldn’t have to go to Psych. Unfortunately, prison guard Bayley (Alan Aisenberg) apprehended Poussey when she tried to intervene. The guard held her back too much using a knee to her back, and the poor inmate died of suffocation on the cafeteria floor.

“Orange Is the New Black” season 4 is now available to stream on Netflix.