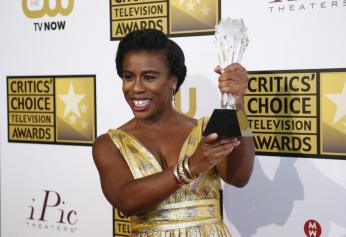 With season four of the Netflix’s hit comedy and drama series, “Orange is the New Black” prepping to complete production, star Uzo Aduba recounts the story of filming for last season’s finale which ends on a high-note compared to previous season enders.

Viewers will remember that the some of the last scenes depicted the inmates of Litchfield Penitentiary enjoying their time frolicking under the sun, seemingly showing that they have well-established relationships and camaraderie.

Talking exclusively to TV Guide, Aduba as Suzanne “Crazy Eyes” Warren, commented on the shooting saying, “It’s a miracle. One of those days was on a Saturday, but it wound up being the nicest day ever. It was super warm. Because it’s October, you think it’s going to be super cold. It actually wound up being beautiful. Our crew was getting up out of their chairs to come and sit in the water with us in solidarity. It was amazing.”

She added that it was one of her fondest moments for season three, “I just remember our cast was so game, so fun, so supportive. I feel like that when I watch it. I watch that spirit of, like, I just felt so happy. Because the day could have gone a totally different way.”

On another news, an insider tells Ok Magazine that transgender Caitlyn Jenner may make a cameo in the series. She has reportedly become friends with Laverne Cox who plays the role of Sophia.

Rumors have it that with Sophia’s friends turning against her last season, putting Jenner on the show would suit the plotline perfectly as the two of them take a stand against bullies.

Moreover, Laura Prepon who plays Alex Vause reveals that although her character is being gunned down, she will be back for the new season. “Yeah, it is a little bit of a giveaway, when you see pictures of us on set.”

She also teased that Piper Chapman needs Alex more now in order to be pulled out from totally going to the dark side, “She sees through all of Piper’s BS. And that’s why they’re such a cool relationship. And I think that Alex knows that she’s putting it on it’s not really her….It’s one of the reasons why Alex dumped [Piper] in Season 3. She’s just like, ‘Listen, this is kind of gross, and where’s the real Piper?'” Speakeasy shares.