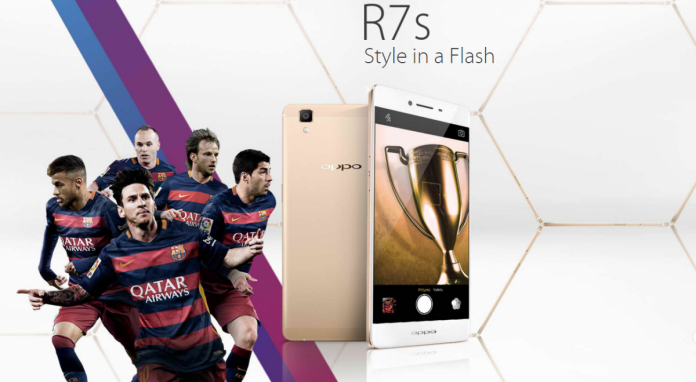 The Oppo R7s is official, as the company unveiled the smartphone at the recently held GITEX 2015 in Dubai.

The Oppo R7s sports a 5.5-inch arc edge AMOLED display with a 1080p Full HD resolution, made with 2.5D curved glass. The device has a “velvety metallic feel”, due to its premium metal alloy body build. It runs under a 64-bit Qualcomm MSM8939 Snapdragon 615 chipset, with an octa-core CPU, and an Adreno 405 GPU. It packs 4 GB worth of RAM, along with a 32 GB worth of built-in internal storage capacity, and supports external microSD expansion.

As for the camera, the R7s has a 13 megapixels rear main camera, and an 8 megapixels front snapper. The selfie camera has a Beautify 3.0 feature, for enhanced selfies. The main rear cam also boasts of a low light HD capturing feature through HDR shooting, an Anti-shake optimization, and a flash shot feature.

The device boots on Oppo’s Color OS 2.1, an operating system based on Android Lollipop 5.1. The new version of the Color OS boasts of a “faster, smoother and better interface”, featuring 252 optimized display scenes, 331 ms app launch average time, and 30% faster boot up speed compared to the previous version. No need to download any “cleaner” apps, for the Color OS has a built-in Automatic Cleaner, which optimizes phone performance in just one tap. The Color OS also automatically sorts icons on the phone’s screen, and performs various different functions with only a mere shake of the device, with the Quick Shake feature.

The Oppo R7s boasts, among others, a “large” battery capacity with an ultra-fast charging technology. The non-removable 3,070 mAh Li-Po battery has a fast charging technology called the VOCC Flash Charge technology, which gives the battery five levels of protection from overcharging and overheating, and gives the phone 2 hours of talk time after charging from 0% in a mere 5 minutes of charging time.

The Oppo R7s will be released in Austarlia and Asian markets on November, and will then be released for the European and North American markets later in December.

Gamescom 2015: Dark Souls III and other games you should watch...