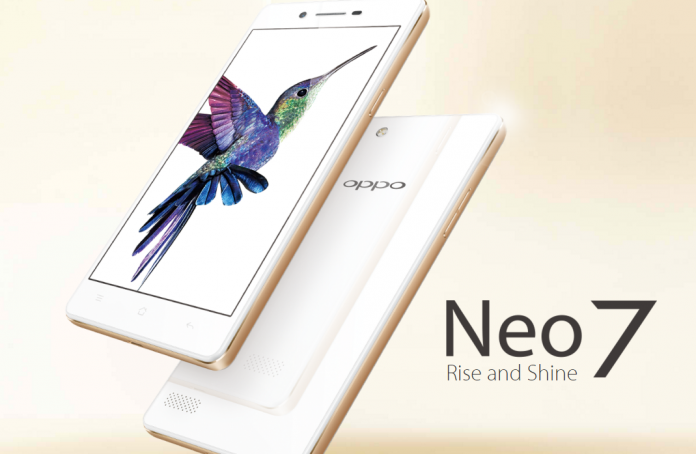 The new Oppo Neo 7 sports a 5.0-inch TFT display with a 540 x 960 qHD screen resolution and a pixel density of 220 ppi. It runs with a 64-bit Qualcomm Snapdragon 410 8916 chipset with a quad-core ARM Cortex-A53 CPU clocking in at 1.2 GHz speed frequency, and an Adreno 306 GPU. The mentioned specs are for the 4G version of the device. On the other hand, a 3G only version has it running with a 64-bit MediaTek MT6582 chipset with a quad-core CPU clocking in at 1.3 GHz frequency. The rest of the specs remain the same.

The memory and storage department also goes on a mid-ranger level as it packs 1 GB of RAM (1024 MB, to be precise), along with 16 GB of built-in internal storage capacity. Fortunately, the new Neo 7 supports a dedicated slot for an external microSD expansion.

As for the camera, the Neo 7 has an 8-megapixel rear-facing main camera. This camera has a back-illuminated sensor with a photosensitive area of up to 1/4 inch and a wide f/2.0 aperture, which means that it has the capability to shoot better quality images on a low light situation as its lens allows more light to be captured compared to other cameras.

The 5-megapixel front selfie camera, on the other hand, has the Beautify 3.0 and Filters features, and the Screen Flash option that brightens up the screen so selfies in low light condition will be brighter when shots are taken.

The device was made available initially in India on Oct. 28 for a price equivalent to less than $200. Release for other Asian countries will soon follow.