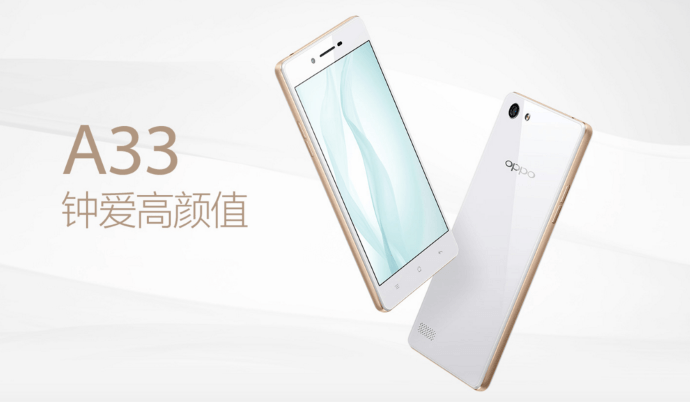 One of the two Oppo phones that were previously certified by TENAA is now officialthe midrange smartphone Oppo A33.

The device is now official in the Chinese region, and according to specs that were detailed, the Oppo A33 is a midrange smartphone that sports a 5-inch TFT display with a 960 540 pixels resolution displayor qHD, a quarter of a 1080p Full HD. Pixel density is rated at 220 ppi. The device measures 142.7 x 71.7 x 7.55 mm. Weighing 146 grams, the phone features dual metal body framing build.

The Oppo A33 is powered by a 64-bit Qualcomm Snapdragon 410 chipset with a quad-core Cortex-A53 CPU clocking in at 1.2GHz. It packs 2GB RAM and built-in internal storage capacity of 16GB. The latter can be further expanded via microSD of up to 128GB.

The device boots on the new Color OS 2.1 by Oppo, a custom OS based on Android Lollipop 5.1. The new version of the Color OS offers a faster, smoother, and better interface. Compared to older versions of the software, the Color OS 2.1 features 252 optimized display scenes, 331 ms app launch average time, and 30% faster boot up speed.

Moreover, the Color OS has a built-in Automatic Cleaner that optimizes phone performance with just one tap. The Quick Shake feature, on the other hand, performs various different home screen functions such as automatically sorting icons on the screen.

The Oppo A33 is currently ‘out of stock,’ but it was launched at a price equivalent to roughly $235.