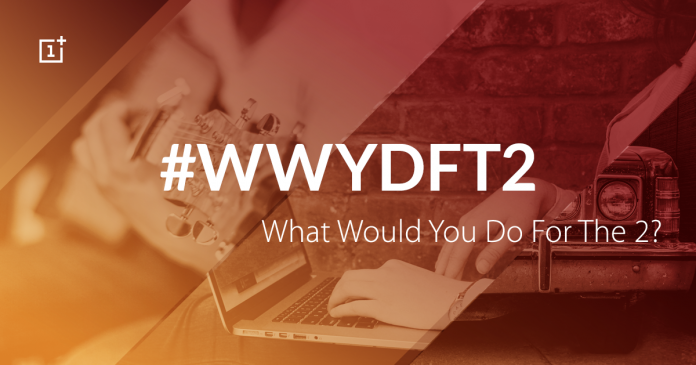 The very much anticipated and most awaited for killer flagship, the OnePlus 2, is finally here!

But while the new flagship is cool and all, some people might feel bummed and disappointed by the fact that an invite is needed for a purchase. What if one failed to score an invite, is it the end of the road to the OnePlus 2?

Good news: it is not the end. OnePlus is offering users and fans the chance to grab the newest flagship phone even without the inviteand without even paying for it! A OnePlus 2, totally free!

Interested? All there is to do is join the What Would You Do For The 2? Competition that OnePlus launched. To get the chance to win a OnePLus 2, contestants must do one of the ten available “challenges” for the contest. The challenges are nothing tough though, if not a little out of the ordinarygoing from customizing your own OnePlus-themed car, organizing a flash mob just for the contest, perform an original OnePlus jingle in public, to making a scene at a public event while wearing a OnePlus shirt.

After selecting a challenge that best fits them, contestants will have to upload the YouTube video URL as proof of the challenge completion, supported by additional images and social media account links, where applicable.

Winners will be announced on August 5.

2. Project the OnePlus logo in a busy area in your city

3. Organize a flash mob with at least 50 people

4. Create a OnePlus-themed dance and get 10 people to post videos of them doing the same

6. Write a poem or sing a song about why you deserve the OnePlus 2 and perform it in public

7. Showcase your love for OnePlus in your social media profiles

8. Go run in the middle of a live performance or event while wearing a OnePlus t-shirt

9. Create an app for OnePlus fans and share with the community

10. Contribute to a local community project with your tech power

Among the most notable features of the OnePlus 2 include a much faster fingerprint sensor, a Snapdragon 810 v2.1 processor that is promised to be “cooler than ever”, USB Type-C port, and 4GB of LPDDR4 RAM.