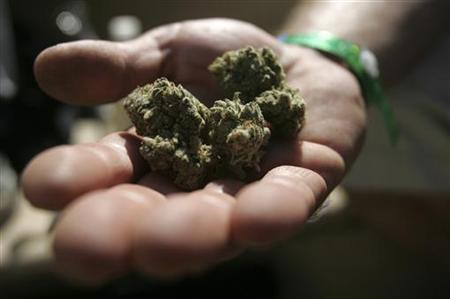 As cannabis bans are relaxed in more U.S. states, the race is on to develop an instant roadside breathalyzer for police to test drivers who may be taking the “high” road.

Vancouver-based Cannabix Technologies Inc, founded by a retired Royal Canadian Mounted Police officer, expects to be first out of the gate with a “pot breathalyzer” – a handheld device similar to those used to detect alcohol.

Cannabix won’t give an estimate of when its product might go on sale, but has a prototype undergoing in-house testing.

Other hopefuls, such as Colorado-based Lifeloc Technologies Inc and a chemistry professor-PhD student duo at Washington State University, are still busy in the lab.

The devices aim to accurately detect the presence of THC, the psychoactive component in cannabis, but can’t provide enough evidence of impairment by themselves.

“I think the first breathalyzer on the market will be a simple ‘yes’ or ‘no’ for the presence of THC at the time of the test, and in that sense it won’t provide a quantitative evidential measure,” said Barry Knott, the chief executive of Lifeloc, which already makes alcohol breathalyzers.

The size of the potential market is unclear, owing to widely varying estimates of cannabis use, and unreliable data on those driving under its influence.

But developers say they will be able to sell pot devices for a lot more than the ubiquitous alcohol breathalyzers.

Marijuana is illegal under U.S. federal law but is allowed for medical use in about half the country’s states. Others, including Oregon and Colorado, have gone further, allowing recreational use.

A roadside breathalyzer would replace a complicated assortment of costly blood and urine tests that can take days to get a result. But even these tests are a long way from showing impairment, as the science on how cannabis affects driving is far from settled.

HOW MUCH IS TOO MUCH?

The National Highway Traffic Safety Administration, in a paper this year, said cannabis impairs psychomotor skills, attention, lane tracking and cognitive function, but not enough is known about how much is needed to affect driving performance.

This is primarily because of the vastly different ways in which alcohol and cannabis affect the human body.

Whether marijuana is smoked or ingested also dramatically changes how the body processes it. It’s also difficult to isolate the affects of cannabis in crashes if drivers have also consumed alcohol and/or other drugs.

But some states are not waiting to reach a consensus on how much THC is too much to drive.

Washington and Montana have set a limit of 5 nanograms/milliliter (ng/mL), while Pennsylvania has a 1 ng/mL limit.

Other states prohibit drivers from having any measurable amount of cannabis in their system.

These limits are more political than based on science, said Nicholas Lovrich, a political scientist at Washington State University who is researching the accuracy of drug-recognition experts – police officers trained to detect drug impairment in drivers.

Cannabix founder Kal Malhi initially aims to cater to Canada and the U.S. states that have zero tolerance for THC, hoping his device – designed to confirm police observations – will be able to accurately detect THC up to two hours after consumption.

The company won’t talk about its technology, other than to say a patent is pending. Aside from law enforcement, Malhi sees employers and educational institutions as potential customers.

Lifeloc’s research has been boosted by a $250,000 grant from the Colorado Office of Economic Development and International Trade.

The company has undertaken laboratory tests of its technology, but creating a real-time device that can collect enough sample for reasonable analysis is proving a challenge.

A few blows are typically sufficient to determine alcohol levels, Knott said. “… With a marijuana breathalyzer we’d have somebody blowing like 20 times – that’s just not going to fly.”

Washington State University is also still in the research stage, as part of a project applying existing technology – ion mobility spectrometry – to drug testing, including cannabis.

However, the likely inability of these devices to accurately detect levels of THC – at least initially – raises the question of whether law enforcement agencies will clamor to buy them.

“If this is just a matter of showing how many people have THC in their systems, then it’s essentially useless,” said Steve Sarich, who runs a cannabis advocacy group and serves as an expert witness for cases involving THC-related impairment.