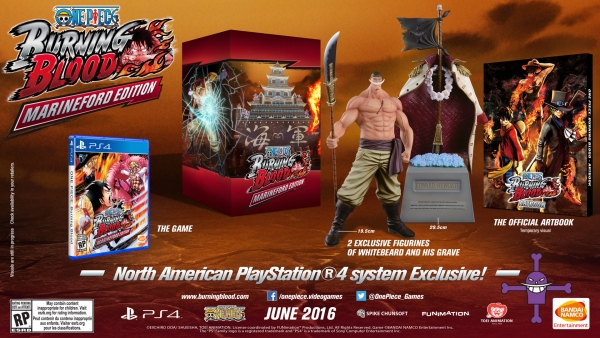 Time to shift gears and up the ante as BANDAI NAMCO Entertainment’s upcoming game “One Piece: Burning Blood” gets a new platform release, a new trailer, and a new Collector’s Edition bundle release!

According to a report by Gematsu, BANDAI NAMCO Entertainment announced the official release of the PC version of their upcoming game “One Piece: Burning Blood.” The release of the PC version of the game will be done via online digital download over Steam. Also, the announced game will be coming to North America and Europe. Add to that, the game publisher also revealed the placeholder release date for the international release of the gameplayers and fans can now expect the game to arrive in their respective regions sometime around June 2016.

Meanwhile, for fans and players in the North American region, BANDAI NAMCO has announced the special and limited edition bundle for “One Piece: Burning Blood.” The “One Piece: Burning Blood Marineford Edition” will be available only for the PlayStation 4 version of the game. This will be released alongside the game and will include special exclusive collectible freebies such as two exclusive figuresa 15.5 inches tall Whitebeard figure as he was seen in the Marineford Arc and a figure of Whitebeard’s grave standing 23.5 inches tall. The official game art book, containing exclusive artworks straight from the game itself, is also in the package. All these will be enclosed in a special collectible box.

No price has been announced, but fans and players should be fast, for there will only be 5,000 sets of this bundle that will be available.

Additionally, players who will pre-order the PlayStation 4 and the Xbox One version of the game will be able to get the playable character Luffy Fourth Gear as well as two other bonus characters that are yet to be announced.