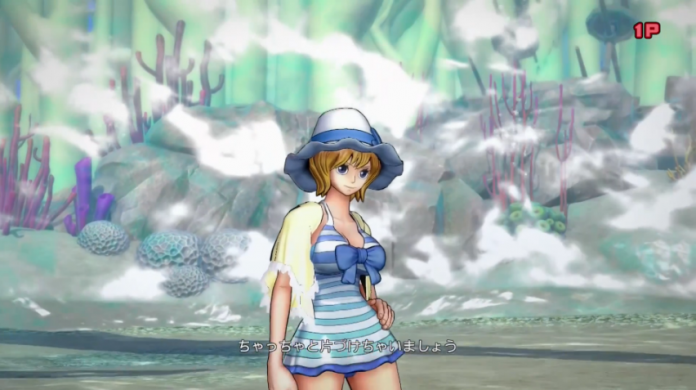 BANDAI NAMCO Entertainment recently released a set of new gameplay videos showcasing more of the characters that will be coming as playable fighters in their much awaited game “One Piece: Burning Blood.” This time, the game publisher released gameplay videos showing Koala in her special swimsuit version as well as Red Hair Shanks. The new videos were released via V-Jump.

In the gameplay demo, Koala in her special swimsuit version, was pit against Bartolomeo. While not having any kind of Devil Fruit powers, Koala relies on her martial arts expertise and physical strength when it comes to fighting. She can also make use of her Haki in order to deal more damage.

Players in North America, who will be pre-ordering their copy of “One Piece: Burning Blood,” will be able to get a free exclusive metal game case featuring Sabo and Luffy. It measures13.5 cm tall and 17 cm wide. Other pre-order bonuses include special character versions of Luffy that will be available as entirely separate playable characters.

The Champion Luffy version from the Davy Back Fight Arc of the animewhere the Strawhats faced the Foxy Pirateswill be given as a pre-order bonus, as well as the Kung Fu Luffy version, and the newest form of Luffythe Gear Fourth Luffy. Having this would enable the players to stay in Gear Fourth the entire battle.

“One Piece: Burning Blood” will be released in Japan first on April 31. North America will get it on May 31. Then, Europe region will have the game on June 3. It will be available for the PS4, PS Vita, and PC. On the other hand, Xbox One versions will be exclusive to the North American and European regions.