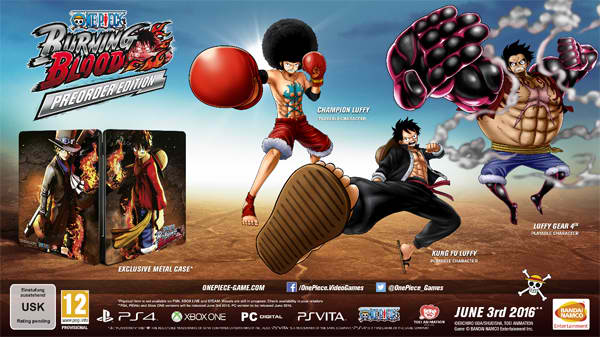 Summer just got hotter for European gamers and fans of “One Piece,” as BANDAI NAMCO Entertainment Europe recently announced the official release date of the upcoming and much awaited game based on the hit manga and anime franchise, “One Piece: Burning Blood.”

As announced through the official BANDAI NAMCO website, “One Piece: Burning Blood” will be released in the European region on June 3, 2016, for the PlayStation 4, PlayStation Vita, and the Xbox One. It is worth noting that the Xbox One version of the game will be exclusively available in North American and European regions, and it will mark the debut of a “One Piece” game on the Microsoft console. The game will also be released in Europe for the PC, but no release date has been announced yet.

Players can now pre-order the game and enjoy a set of exclusive freebies. Players who will buy the “One Piece: Burning Blood” Pre-order edition will be able to get a free exclusive metal game case featuring Sabo and Luffy on the case’s art. The metal case measures 13.5cm tall and 17cm wide. Pre-order bonuses will also include special and exclusive playable character versions for series main protagonist Monkey D. Luffy.

Moreover, those who will pre-order the game will be able to get a free Champion Luffy costume from the Davy Back Fight arc, Kung Fu Luffy from the original manga, and the newest power up version of Luffythe Gear Fourth Luffy. Having Gear Fourth Luffy as a playable character brings in great advantage, as it will have players control Luffy in Gear Fourth mode all the time.

Players who will also buy a copy of the game on June 3 will also be getting the above mentioned bonus playable characters in the Day One purchase bonus.