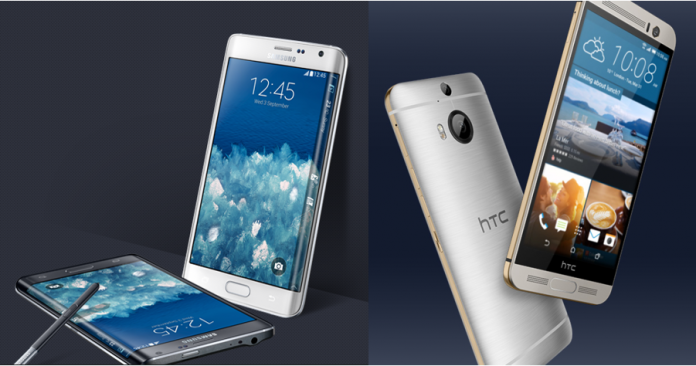 Last week, it was announced that One M9+ is on its way to Europe and is confirmed to make its US and Australian debut. Its features have already been catching the eye of several onlookers, but how does it fare compared to Note Edge?

One M9+ comes out the market full metal clad with options of gold, gun-metal grey, and a silver and gold combination while Note Edge surrounds only its frames with metal for sturdier handling. It has black or white color options. One M9+ is just like its predecessor, One M9, but with larger display, higher resolution, improved processor, and a built-in fingerprint scanner.

For its display, One M9+ sports a 5.2 inch Super LCD 3 screen at 1440×2560 resolution. On the other hand, Note Edge comes as a full phablet at 5.6 inch Super AMOLED screen display at 1600×2560 resolution. It gives a vivid and detailed display which is good even for outdoor visibility.

In terms of power and memory, One M9+ is runs on an Octacore chip at 2.2 GHz with MediaTek’s high end processor Helio X10 CPU and PowerVR G6200 GPU. For its RAM, the phone has 3GB while internal storage is at 32GB with an option to expand through its micro SD slot. As for Note Edge, even if it was released almost a year ago now, its chipset of Qualcomm Snapdragon 805 is still quite good. It also comes with 3GB RAM and an internal storage options of 32GB, 64GB, or 128GB that is expandable through external micro SD up to 64 GB.

For its camera, One M9+ boasts of a 20 megapixel back shooter with depth-sensing Duo camera, which can shoot 4K shots or produce artistic photos and 3D effects similar to the One M8 models. The front shooter is a 4 megapixel UltraPixel camera. However, it still has problems when it comes to taking photos in low lit areas. Meanwhile, Note Edge’s back camera is at 16 megapixels with optical image stabilization while the front shooter is at 3.7 megapixels and altogether takes great shots.

It is no doubt that specifation-wise, One M9+ boasts of more options compared with Note Edge as the Samsung handset was released more than six months ahead of the Taiwanese phone.

However, NDTV Gadgets still gives a higher overall rating to Samsung Note Edge for the overall package that it offers relative to One M9+ in terms of battery life, camera rating, and value for money.

Phone Arena added that Note Edge is still a good option for users whose priority is productivity-on-the-go.