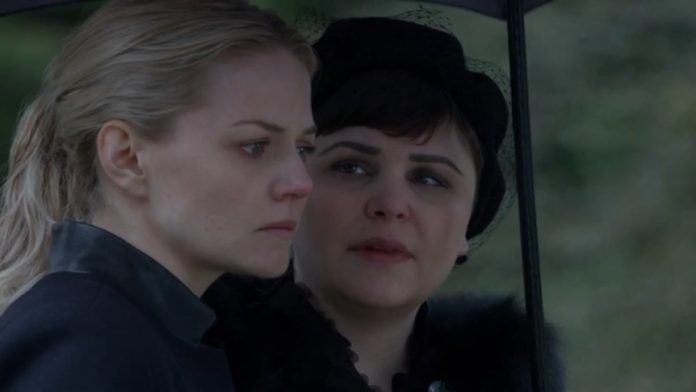 After Robin Hood’s (Sean Maguire) death in episode 21 titled “Last Rites” left Storybrooke grief-stricken, viewers are to prepare for an emotionally charged two-hour “Once Upon a Time” season 5 finale scheduled on May 15 at 7 p.m. EDT. At the same time that screenshots from the season finale were published, the official synopsis was released by ABC.

The first of the two-hour special, episode 22 titled “Only You,” will highlight the grief being experienced by Regina (Lara Parrilla). Meanwhile, Henry (Jared Gilmore) who is deeply affected by how magic has damaged his family, will set out with Violet (Olivia Steele Falconer) to destroy magic. The heroes, in their attempt to open a portal in order to send Merida (Amy Manson) and other Storybrooke guests back to their homes, will ultimately find themselves in a deranged new world.

The second part, episode 23, “An Untold Story,” will showcase the different struggles fought by the characters  Emma and Regina racing against time to get to Henry; Regina fighting against the frustrations over her wicked persona from the past; and the rest of the heroes battling with disturbed individuals whom they stumbled across in the alternate world they have just gotten themselves into.

Theories arise on whether or not Robin’s death would bring Regina back to being the embittered Evil Queen. Show executive producers Adam Horowitz and Edward Kitsis address this speculation as they talk about the characters’ sentiments in an interview with Entertainment Weekly. Horowitz compares Regina with Emma in the sense that both are dealing with some inward crisis amid which Regina “finds herself tested.” Kitsis then adds: “Also, Regina finds herself, once again, feeling like the Evil Queen is something she can never break free off. There’s a karmic debt that she still hasn’t repaid.”

The showrunners also confirm that season 6 will be set in Storybrooke, not in another alternate realm, and that next year the series will be following a different pattern. Kitsis teases, “Just when you think you’ve got us, we’re going to change it again.”