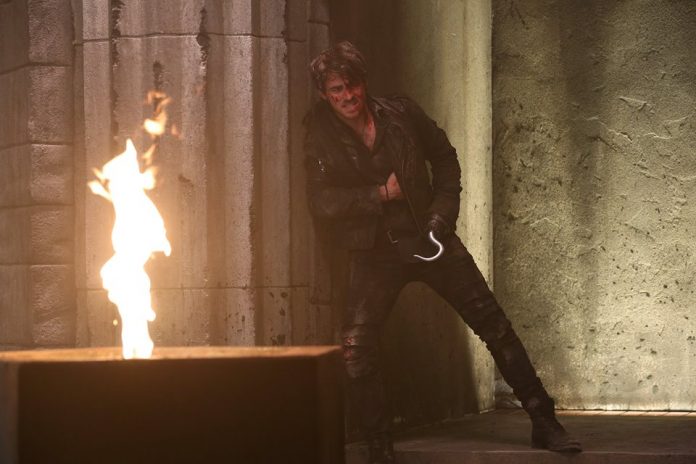 This Sunday’s edition of “Once Upon a Time” will feature Mary Margaret (Ginnifer Goodwin) searching for someone she knows from the past for a mission. This is after a captive from Hades escapes and tells them that Hook (Colin O’Donoghue) is in captivity too and the only way for them to help him is to defeat the repulsive beast that stands guard at the prison.

The sneak peek for the next episode titled “Labor of Love” reveals Hook waking up from a previous state of slumber. As he gains consciousness, he sees that he is not alone in the prison as he sees Megara (Kacey Rohl).

Despite having been in the dungeon for quite a while already, Megara holds on to the hope that she will be able to free herself out of the dangerous realm that she is currently in. With her adventurous spirit not leaving her despite her ordeal, she will finally succeed in setting herself free.

Apparently, the teaser suggests that Megara has escaped the prison while Hook remains a captive. However, her escape will prove to be beneficial to Hook as well as she finds her way to Hook’s friends and inform them of his whereabouts.

While the task of saving Hook is no walk in the park, as the team has been warned, they will not just allow the life of their friend to remain in jeopardy. As they move heaven and earth to save Hook, Mary Margaret realizes that an old friend of hers may be the key for them to succeed in their quest. This friend is Hercules, who is breathed to life by actor Jonathan Whitesell.

With Hercules’ belief that he is destined to be the world’s greatest hero, the team seems to have already won half the battle… at least, Mary Margaret thinks so. Apparently, the Hercules standing in front of Mary Margaret is no longer the Hercules she knew in the past, as the courage and confidence that he used to display seems to have waned. Nonetheless, this doesn’t stop her from pinning her hope on her old friend.

With the half-hearted Hercules in tow as they head to Hook’s prison, does the team stand a chance in rescuing their friend?

Find out this Sunday on ABC as “Once Upon a Time’s” “Labor of Love” episode unfolds.

'The Affair' season 3 spoilers: Main characters to suffer the consequences...