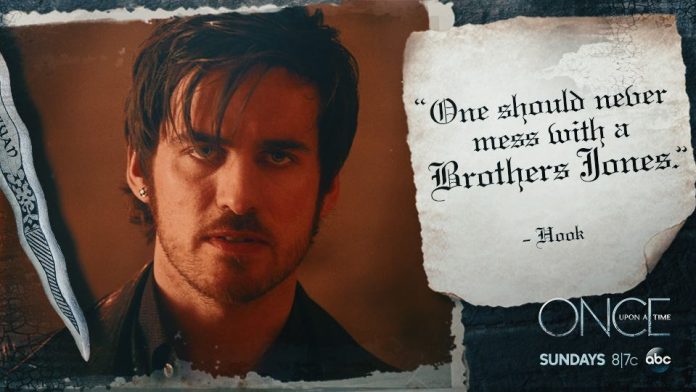 Captain Hook (Colin O’Donoghue) will be 20,000 leagues under the sea in the upcoming, brand-new installment of ABC’s fantasy series “Once Upon a Time” season 6.

In the promotional clip for the upcoming episode, the narrator states, “Captain Hook has faced the impossible on the high seas. But never 20,000 leagues under the sea.” The scene then showcases someone poking him, “Welcome aboard, mate.” Upon waking up, the hero suddenly lashes out against his capturers. The clip ends with Captain Nemo (Faran Tahir) introducing himself and saying, “There is a mission I need your help with.”

Titled “Dark Waters,” reports claim that the narrative will showcase the said character’s backstory with Nemo, the iconic captain in the classic novel “Twenty Thousand Leagues Under the Sea.” In the series, Hook will apparently be recruited in some sort of mission which remains a mystery for now. It is predicted that whatever quest the two have, it will pose a great challenge for the pirate.

It is also believed that his character may also be seen in a new light and with more depth. Although he is said to be capable of having the capacity to love with all his might, he also appears to be someone who cannot be messed with when the going gets tough.

It can be recalled that back in episode 5 titled “Street Rats,” Emma (Jennifer Morrison) asked Hook to hide the shears in the ocean. She promised that she will use the shears only as a last resort and if they cannot find another way out of their current dilemma. However, Hook lied about doing so only moments after Emma said that there would be no more secrets between them.

'Star Trek Beyond' news: Fans might see a 'deconstruction' of franchise...