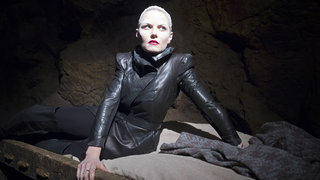 When Emma Swan sacrificed herself and turned into her evil version, literally called the Dark Swan, fans of modern retelling fairy tale show Once Upon A Time are expecting that her transformation will have repercussions on her loved ones.

During San Diego Comic Con, Colin O’Donoghue who plays Emma’s love interest Hook, told Popsugar that it will be really difficult for him to adapt with the changes.

The actor also teased that Hook is deciding between how to bring her back and going dark himself, “I think he is fully invested in this relationship, in being in love with Emma, and I think he’ll do whatever it takes to try to bring the woman he loves. It’s going to be interesting with Hook figuring out a way to bring Emma back and whether or not he can do that or whether or not he’ll decide to go back to the darkness.”

Meanwhile, Josh Dallas who portrays Prince Charming mentioned that Emma’s darkness will put a strain on his relationship with wife Snow White as they try to find a way to save their daughter.

However, he also noted that is not “all gloom and doom” for the new season as he will bond with King Arthur as they go on heroic journey to Camelot, Entertainment Weekly reported.

With newcomer Liam Garrigan playing King Arthur, it was revealed earlier this month that Camelot will have a big role in Season 5.

During the Season 4 finale, it was revealed that the mysterious Sorcerer who could rescue Emma from the darkness was actually Merlin.

Season Five is slated to premiere on Sunday night, September 27 on ABC.