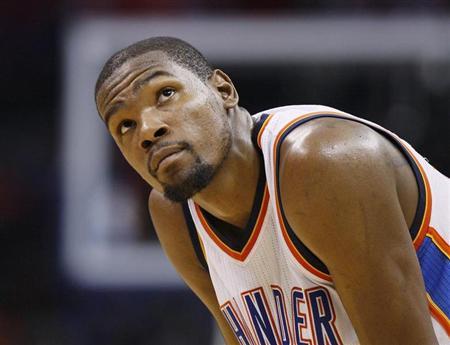 Some reports claim that former Most Valuable Player Kevin Durant may become a free agent in 2016 as he only has a year left on his contract with Oklahoma City Thunder.

Although most of the team executives were reportedly polled informally and have said that they expect Durant to stay in Oklahoma, rumors have it that as early as now, Washington Wizards, Golden State Warriors, Dallas Mavericks and Los Angeles Lakers may make a move to acquire the star player.

However according to Sports World Report, re-signing Enes Kanter after Portland Trailblazers matched up his seemingly high price of $70 million, is an important part for Oklahoma to retain Durant on its roster especially with the new head coach Billy Donovan taking over from Scott Brooks.

Adams’ management Wasserman Media Group said that it is due to conflicts in his schedule.

“Due to scheduling conflicts over the coming months and Steven’s focus on being ready for the start of the 2015-16 regular season, Steven would not have been able to join the national team until very late in their tour,” they said to Sportal.

The report added that the player does not want to change what the team currently does on the court but he plans to be a part of it in the future.

“Because he does not think it is the right thing to join the team so late in the process he will not be participating with the New Zealand national team in the Oceania series. While he won’t he playing this year, Steven remains very keen to be part of the team in future competitions,” the statement further read.

Without the player who has an average 7.7 points, 7.5 rebounds and 1.2 blocks per 25.3 minutes per game, the team may have a slimmer chance of winning, HNGN noted.