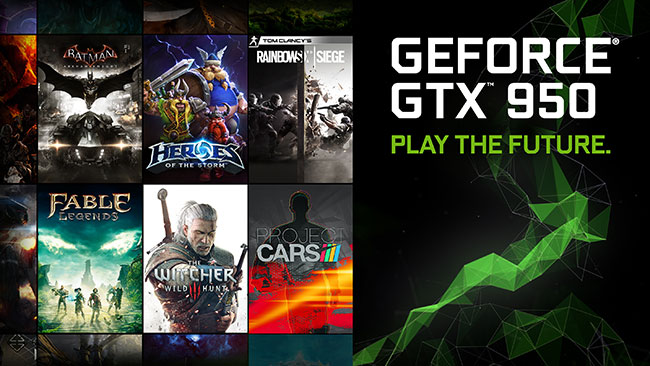 Ahead of its launch last August 20, the details of the mid-range graphics card from NVIDIA have been leaked online days prior to its release and they show that GeForce GTX 950 features 768 CUDA cores.

According to Videocardz, the other specifications of the card that presumably target the budget conscious players are 2GB GDDR5 memory that has 128-bit interface; the thermal design power is 90w recommended to be partnered with 35w power supply; texture units at 48 TBC and; ROPs at 32TBC.

Moreover, when the card becomes available, Eurogamer shares that full features include a base clock of 1024 MHz, a boost clock of 1188MHz and memory clock of 3300MHz. The L2 Cache is at 1024K while the memory bandwidth is at 105.6GB per second combined with bilinear texture rate of 49.2 GigaTexels per second. The fabrication process is 28nm with transistor count of 2.94billion. The card is powered using a single connecter with 6-pin. The thermal threshold is 95 degrees Celsius.

The report added that GTX 950 is a cut-down version of GM206 chip found in the GTX 960 as the CUDA core count is reduced of up to 25 percent from the latter’s 1024 CUDA cores. On the bright side, all of the chip’s media features are still intact such as next generation HEVC encode and decode, a support for HDMI 2.0 and HDCP 2.2 and accelerated hardware of h.264.

The memory although it seems measly on paper, is said to be enough when playing games at 1080p resolution and can even reach up to the ultra-level detailed graphics.

PC World reports that the card seems to be optimized for competitive multiplayer online battle games such as “Dota 2” and “Leagues of Legends.”

The GeForce GTX 950 retails at $159 and now available worldwide.