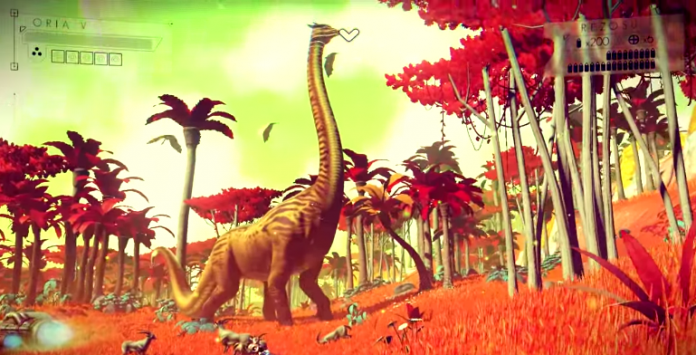 “No Man’s Sky” was the first indie game to be revelead as the centerpiece in E3 and the ambitious game has overcome numerous challenges in its development. Sean Murray, the thirty-four year old founder of Hello Games had to sell his house to start the company. The team began with only two artists and two coders in a small office. Their studio in Guildford, England, even experienced a “biblical amount” of flooding.

Meanwhile at the PC Gaming Show at E3, Murray announced that No Man’s Sky is releasing on PC at the same time as the PS4 version. No Xbox version has been confirmed yet.

As for the release date, Murray says, “We can’t announce the date right now, because of things that are not entirely in our control, but honestly for good reasons. It’ll be announced as soon as we can.”

The game has been made by a small team of comprised of ten people. He adds, “It’s easy to forget we’re just a small self funded indie studio. I remember even on Joe Danger, we ran out of time, energy and even money, maxing out credit cards, but we just kept going. That’s where we are now.” The company is now hiring additional people to help work on the game.

Moviepilot predicts that the game might coincide its release with the Project Morpheus. The website adds that this will be a good move for Sony. Sales for both “No Man’s Sky” and the virtual reality headset could certainly improve if the award-winning, highly anticipated game is sold for the PS4 along with Project Morpheus support.

Developer Sean Murray claims that 18,446,744,073,709,551,616 computer-generated planets can be explored. “The world around you is generated by your PS4 at the point you visit it. Leave and it’s all thrown away, but if you return it is generated again exactly as it was. This also means the game will be completely playable offline.”

The game contains no cutscenes, dialogues, or playable characters. Nevertheless, there is a catch: Destroying the flora and fauna of planets or attacking space aircrafts can result in combats with the Sentinels in the game. On the other hand, players can receive rewards from helping factions. Players choose among a trading, flighting, or long-distance exploration ship to navigate through the worlds.

Outlander season 2 spoilers: Much of second season action will be...