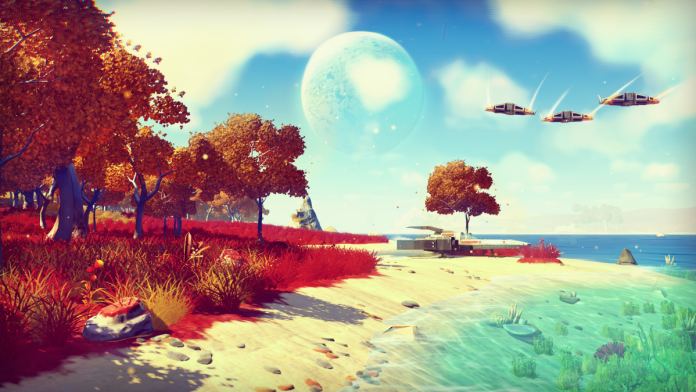 Hello Games have been increasing the presence of its most anticipated role-playing game for the year, “No Man’s Sky.”

The game is officially described by Hello Games: “No Man’s Sky is a game about exploration and survival in an infinite procedurally generated galaxy… The night sky was filled with more stars than you’ve ever seen, and we’ve all thought that this is exactly where videogames would go, videogames that contained the whole universe, and you’d be able to visit it all. No Man’s Sky takes that jump.”

Although it has not hit the market yet, the upcoming RPG which was unveiled at 2013 VGX gaming conference and has been voted by some critics during E3 last year to have the “Best Original Game” and “Best Independent Game,” showcased interesting gameplay trailer that may put fans in a better mood.

The player who will take the character of an astronaut may be able to explore 18 quintillion life-size planets which was made possible not by designers but through algorithms. The journey starts on an undiscovered planet and from there the decision and how the game will progress depends solely on the player’s reconnoiter. He may choose from various adventures taking off the ship, staying on the place or going further into the universe. The outstanding feature of the RPG is that all elements not only served as backdrop but they can all be investigated.

Talking to The Guardian, co-creator Sean Murray said that the possibilities are endless for the truly open world, “We are attempting to do things that have never been done before. No game has made it possible to fly down to a planet, and for it to be planet-sized, and feature life, ecology, lakes, caves, waterfalls, and canyons, then seamlessly fly up through the stratosphere and take to space again.”

Murray further mentioned that the game will serve to different types of gamers who want to create their own story, “We don’t know whether people will congregate or disperse. I know that people don’t like to be told that we don’t know what will happen in our game, but that’s what is exciting to us.”

No official details are made yet for the release date but rumors have it that it may become available during second half of the year for Playstation 4 and PC.

Bad Boys 3 news: Will Smith to be offered role after...