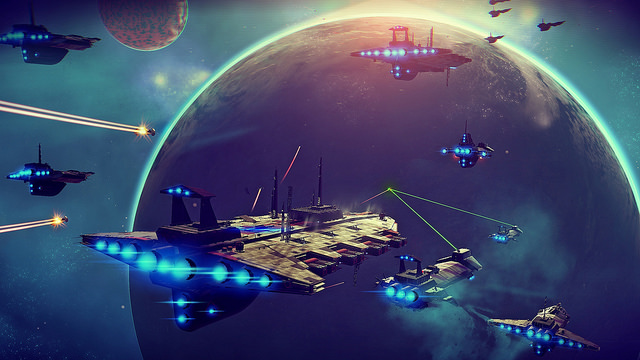 With all the hype that’s been surrounding No Man’s Sky lately, many have been greatly interested in the gamewith its promise of a massively big and nearly infinite universe, endless possibility of gameplay, and a freshly unique gameplay mechanics.

Just recently, Hello Games shared via the PlayStation Blog 41 things that every excited player should know about No Man’s Sky.

Here are 11 highlights from the list of 41 things about No Man’s Sky.

2.) Nothing is random. “Everything exists for a reason, and is governed by maths.”

3.) The game will be completely playable even when offline.

5.) Everything that the eye can see is a real place. That mountain from afar? That’s not a simple environment graphics. Everything can be visited and explored.

6.) While the Sentinels will always be on the lookout for players, not every planet is governed by them. There are lawless planets perfect for gathering resources.

7.) Much like in GTA, each act may earn players an additional “wanted” level, which will make Sentinels more eager in pursuance.

8.) Dying could be a big problem. While players do respawn, revivals means that any discovery, items, and even the ship is now gone.

9.) Each planet is populated by different animalssome are friendly, some try to attack players, and some attack each other.

10.) The official currency of the game is called “Units”.

11.) The official soundtrack album of No Man’s Sky will be performed by 65daysofstatic, Sean Murray’s favorite band.

'The Witcher 3: Wild Hunt' DLC: New Game Plus expansion out...

OnePlus 3 release date: Carl Pei teases it may be before...