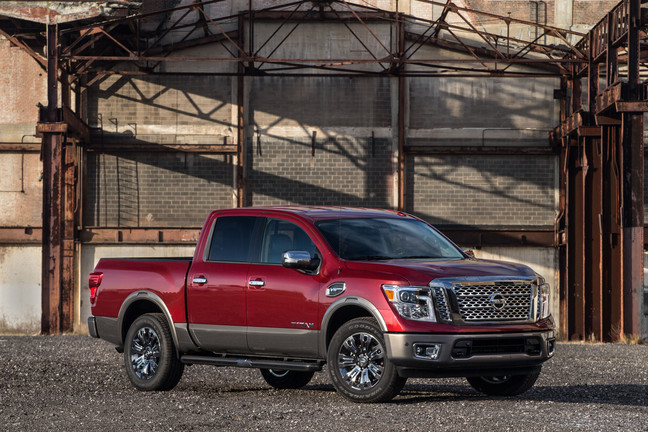 The touted younger sibling of the Nissan Titan XD pickup truck called 2017 Nissan Titan has been recently unveiled during the Chicago Auto Show.

The new model is said to carry the same body design, powertrain that produced 390 horsepower and 401 pound-feet of torque, and 5.6-liter V8 engine as its predecessor. It will be mated with a 7-speed automatic transition.

Although they have striking similarities, the 2017 Nissan Titan is a half-ton truck, different from its bulkier and heavy-duty older brother when it comes to some specific details.

Nissan North America’s director of product planning for trucks, SUVs and commercial vehicles and specialist for Titan and Titan XD shared in an official statement, “There’s a strong family resemblance between Titan XD and the standard Titan, with their shared rugged exterior style. Titan will compete in the heart of the full-size pickup segment the half-ton while the Titan XD provides a unique solution for customers by bridging the cost and capability gap between traditional half-ton and full heavy-duty pickups. Together Titan and Titan XD will cover nearly 85 percent of the total full-size truck market.”

The so-called standard model is built on a separate chassis and even has lug nuts unlike those in Titan XD. It measures 139.8 inches in wheelbase, 77.2 inches in height, 79.5 inches in width and 228.1 inches in length which makes it 14.7 smaller than the Titan.

There will be 4×2 or 4×4 drive configurations to be offered in three cabin configurations – Crew Cab, King Cab and Single cab. While the five trim levels available are S, SV, PRO-4X, SL and Platinum Reserve. Moreover, three bed lengths measuring 5.5, 6.5 and 8 feet are also some of the options to choose from.

The vehicle will be assembled in Canton, Mississippi with the 5.6-liter V8 gasoline to be built in Decherd, Tennesse. Information regarding the pricing will be announced in the following months as units are expected to go on sale this year during the summer. A V6 gasoline engine will also become available on a later date.