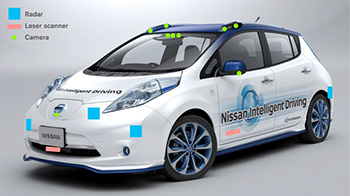 Piloted drives are becoming the focus of more and more automobile manufacturers nowadays. Japanese car company Nissan has joined the innovation and has started testing their prototype called Piloted Drive 1.0.

According to Nissan, Piloted Drive 1.0 will be offered in Japan by the end of 2016. The system will allow “autonomous driving under heavy highway traffic conditions.” Moreover, the company said on their website that they are aiming to implement multiple lane piloted drive that can perform lane changes on highways by 2018. Two years after, Nissan hopes to release the system to allow vehicles “to successfully manage city/urban roads- including intersections- autonomously.”

Among the functions that the system can perform are distance control, lane keeping, overtaking, merging, exiting a freeway, interchange driving, turning, and stopping at traffic signals.

The vehicle that the automobile giant will use to test the piloted drive system is designed like the LEAF electric vehicle (leading environmentally-friendly affordable family car). However, it has additional features such as laser scanners, cameras, high-speed computer chips, millimeter wave radar, and Human Machine Interface (HMI). These tools will help the vehicle operate both on city and highway roads.

The laser scanner was developed by the company to detect the distance between the test vehicle and its surroundings. By using 3D measurement, the vehicle can navigate roads and tight spaces. Meanwhile, the 8-way 360-degree view camera system was specifically designed to allow the accurate routing decisions.

Technologies implemented by Nissan for Piloted Drive 1.0 and the prototype vehicle adhere to the Zero Emission and Zero Fatality goal of the company.

Last Oct. 29, tests have started in Japan. No official date has been announced for overseas demonstrations.

Nissan’s Senior Vice President Takao Asami said, “We at Nissan are setting clear goals and preparing for the implementation of piloted drive. The prototype that we’re introducing here today is proof of how close we are towards the realization of this goal. Nissan aspires for a safe and trouble-free motoring future, and we plan on leading the industry in the implementation of piloted drive.”

iPhone 7 rumors: Apple may ditch the headphone jack in favor...