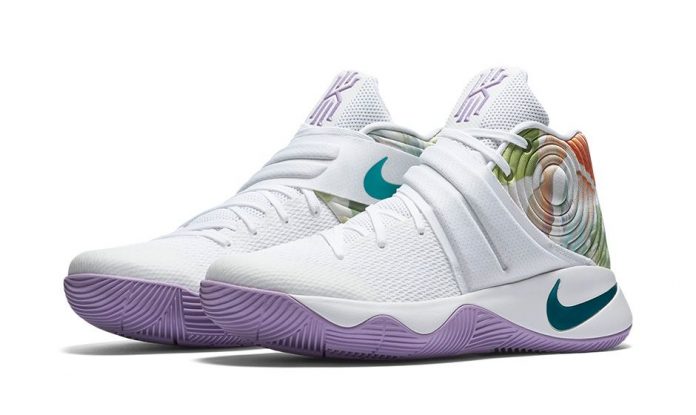 According to the shoemaker’s official site, the collection becomes available in Men’s sizing on SNKRS and in full family sizing on their online shopping store. It is said to feature blasts of spring pastels and patterns that highlight the current season’s basketball shoe offerings in the lines after NBA legendary players such as LeBron James, Kyrie Irving, Kobe Bryant and Kevin Durant.

Sports World News shared that the LBJ 13 Easter for the Cleveland Cavalier star’s edition is composed of white/pure platinum accented with mango-arctic glacier. It also has a white upper part with multicolour lining and the signature Nike Swoosh. The speckled midsole and icy blue outsole is deemed to complete the edition sneakers which predicted to carry the price tag of $200.

The report added that when it comes to the design of Cavaliers’ point guard, Kyrie 2 shows a mixture of hyper jade, urban lilac and bright mango colorway on a white backdrop. It also has white-based upper part designed with multicolor hints, white laces and hyper jade Nike Swoosh. The outsole is also in lilac and has the emblem of the player’s name “K.I.” It retails for $125.

Meanwhile, the addition of the Black Mamba series dubbed as Kobe 11 is deemed to be a potential top seller as it will be the legend’s final on-court signature shoes released before he retires from the profession and his longtime team, Los Angeles Lakers. The themed limited edition offering is presented in dark grey combined with volt-bright mango-court purple and Nike Swoosh. The outsole is translucent and bears a skull logo. Nike revealed that fans can purchased a pair for $200.

Lastly, Oklahoma Thunder power forward’s KD 8 Easter has a metallic silver-white/grey-based upper colorway combined with white laces, lining and tongue and features a grey KD logo. It is finished off with a white midsole and gum sole and can be bought for $180.