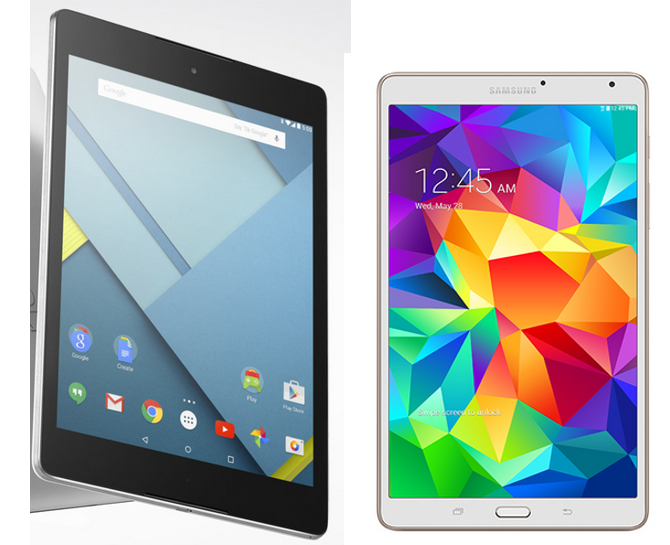 When it comes to tablet choices, we have several in the market that are good options. For now, we will take a look at Nexus 9 and Samsung Galaxy S 8.4.

Nexus 9, produced by HTC, is one of the first devices that run on Google’s Android Lollipop 5.0, a feature that most users look forward to. It is at 8.9 inches with 1536 x 2048 pixel resolutions at 288 ppi and IPS LCD display. On the other hand, Samsung Galaxy S 8.4 boasts an 8.4 inch tablet, which is great for portability. It has a super AMOLED display with 1600 x 2560 pixel resolution at 359 ppi. Both tablets show excellent display and are sharp even on angles, but differ in their aspect ratio. While the 4:3 ratio of Nexus 9 is not very good on watching videos and movies, the 16:9 ratio of Samung Galaxy S 8.4 pose difficulty in internet browsing.

In terms of camera, both have an 8 megapixel rear shooter with LED flash while Nexus 9 have more DSLR-like features such as aperture size and focal length. Nonetheless, the Samsung device has more features such as digital image stabilization, autofocus, digital zoom as well as settings to tailor the external conditions such as white balance presets, ISO control, and exposure compensation. For its front camera, Nexus 9 is at 1.6 megapixel while Samsung S 8.4 is at 2.1 megapixels. Overall, Samsung Galaxy S 8.4 shows sharper pictures with its higher pixel density.

Both tablets offer pros and cons, with some features offered better on Nexus 9, while others on the Samsung 8.4. According to Android Authority, Samsung S 8.4 offers more flexibility for multitasking while Nexus 9 is for users who want a simpler tablet.