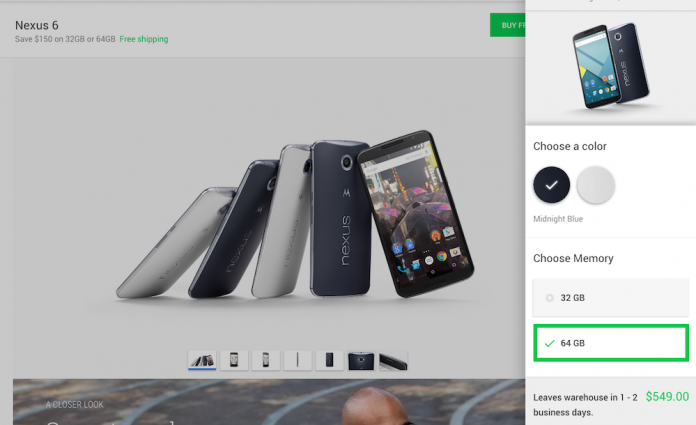 Father’s Day is just around the corner, and also it’s the season for graduates! To make the celebrations more memorable and exciting, Google is giving its customers a great deal for the Motorola Nexus 6 (also known as Motorola Nexus X/Moto X Pro in China).

In need of a new phone right now? Now might be the best time to cash-in for the Motorola Nexus 6, as Google Store is offering the smartphone for $150 off its regular price. The variant with a 32GB built-in internal storage is now selling for only $499, while the 64GB variant is now available for only $549. But Google’s sweet offer does not end therewith every purchase of the phone, Google Store also offers free shipping!

So, what makes the Motorola Nexus 6 a must-buy, now that it’s on a huge price drop? First of all, the Nexus 6 runs on a stock Android Lollipop v5.0, under a quad-core Snapdragon 805 2.7GHZ processor, and an Adreno 420 GPU, which should be more than enough for running some nice games. It has a 5.96-inch AMOLED capacitive HD touchscreen display, equipped with Corning Gorilla Glass 3, making the phone’s display scratch proof. It comes with 32GB or 64GB worth of built-in internal storage, and with 3GB worth of RAM, perfect for multitasking and running heavy apps. However, the Nexus 6 doesn’t support a microSD external memory expansion.

A 13 megapixel rear-facing camera enables users to record videos of up to 2K resolution at 30 frames per second, along with a 2 megapixel front-facing camera for selfies. The Nexus 6 supports the use of a nano-SIM only. What’s more, the phone is water resistant, and all powered by a non-removable 3220mAh Li-Po battery.

A few weeks ago, T-Mobile also did a price-drop sale on the Nexus 6, offering a $100-off the regular price tag for both the 32GB and the 64GB variant. Google’s current offer is cheaper by $50.