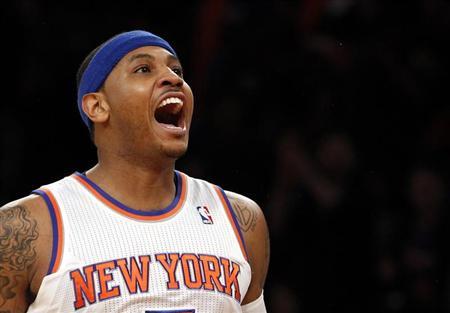 Rumors regarding NBA player Carmelo Anthony leaving New York Knicks have been making a lot of buzz since the trade deadline is fast approaching.

According to New York Daily News, the Boston Celtics and Cleveland Cavaliers have allegedly discussed a blockbuster trade which centered around Kevin Love, and there were preliminary discussions suggesting that they want the deal to expand to Anthony.

If this comes to fruition, the player has to waive his no trade clause in order to make the deal happen. In return, the Knicks will reportedly receive draft picks and players which may include Timofey Mozgov who was previously traded to Denver Nuggets.

What may have added to the assumption is his seemingly cryptic answer to reporters in Toronto, Canada when asked whether he thought about spending his future with his losing organization, “Not yet. I’m pretty sure I’ll have that conversation with myself and my family and my team. But it’s not a conversation for right now.”

However, in his appearance in “Sirius XM NBA Radio,” Anthony has addressed the speculations again saying, “There’s always some trade s*** going [on]. I’m not going anywhere.”

He also said that his decision to re-sign to the team two summers ago is a sign that he is dedicated and not going anywhere. Admitting that he is sometimes bothered with the speculations that he is leaving, “I don’t know where [trade rumors] come from so sometimes it gets to you as a player. Just get tired of hearing something all the time. I’m not on the run. I could’ve ran somewhere when I was a free agent, you know what I’m saying? I came back for a reason. I came back because I wanted to do this,” he continued.

He reiterated that his goal is to play for a team that got what it takes to have the NBA title, and he is staying with Knicks, “I want to win a championship. At this point in my career, that’s the only thing that I really care about,” he said. “But I’m not, I mean, there’s nothing out there for me right now… I’m not even entertaining no trade talk right now.”