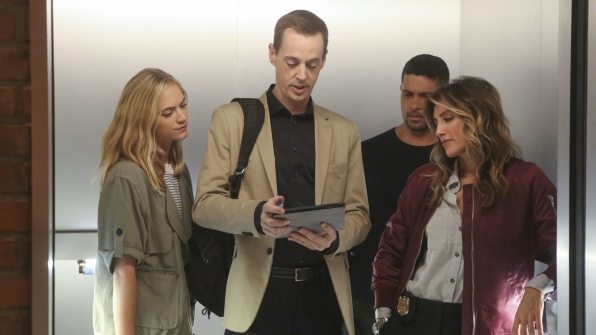 With introductions already out of the way for “NCIS” season 14, Wilmer Valderrama’s Nick Torres officially gets out of the missing agent’s list as he gets reacquainted with the Naval Yard in Washington, D.C. But his return is anything but simple as he also gets a reintroduction with fellow squad newbie, Jennifer Esposito’s Alex Quinn.

In tonight’s episode titled “Being Bad,” both Torres and Quinn will be settling down as the newest members of Leroy Jethro Gibbs’s team, played by show veteran Mark Harmon. But aside from their brand-new roles as regulars in the elite squad, it appears that their history runs deeper than initially perceived making things a bit more interesting.

“She was the instructor that trained him and assigned him to be an undercover agent … but there may be other history between Alex Quinn and Nick Torres that eventually will resurface,” Valderrama exclusively told TV Guide regarding the budding tension between the two.

It can be remembered that in last week’s premiere, Quinn had nothing but good things to say about Torres so it could be that the two had a good working relationship prior to their new situation. Unfortunately, the actor did not reveal their history outside the mentor-mentee link. But the “That ’70s Show” alum hinted about a possible familial connection which is one of the possible scenarios other than having been romantically involved with each other.

“We know he has a sister, and that will be one of his reasons why he returns to Washington, DC. But other than that, we know nothing. We don’t know where his parents are from. We don’t know how he grew up. We don’t know anything,” he teased.

In spite of everyone trying to get a feel of their newly-overhauled squad, the NCIS Major Case Response Team (MCRT) will have to make do with what they have as they have a busy day ahead. On top of trying to uncover the mysteries of a busted bomb plot and dealing with a theft ring, they also have to investigate an eerie death during a Quantico reunion.

The episode comes with a promo clip promising an action-packed installment with all agents immersed in the seemingly multiple arcs.