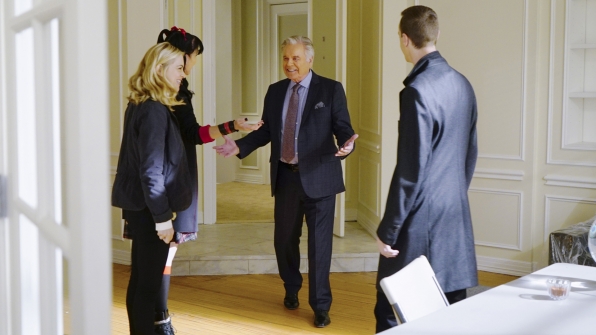 Last week on “NCIS,” Abby (Pauley Perrette) officially welcomed Quinn (Jennifer Esposito) and Torres (Wilmer Valderrama) to the team, and the gang found out the reason behind a woman’s kidnapping.

Abby welcomed Quinn and Torres to the NCIS by giving them items that she’s knitted herself. Quinn got a sweater which says “Welcome to NCIS” in huge block letters, while Torres got a cobalt blue vest with the same lettering. The team told them that its tradition; McGee (Sean Murray) said that he got a pair of knitted socks which he still wears 13 years later, while Bishop (Emily Wickersham) got a friendship bracelet. Quinn gamely donned her sweater, but Torres said that he doesn’t wear vests and that he definitely doesn’t wear bright colors.

Later, a woman named Kelly (Emily Alabi) who had been missing for five days was found, and it was initially thought that her husband might have been behind the kidnapping. But her husband, Chris (Justen Overlander), was found dead in his own car, and it turned out that the law firm that he worked for uses its employees as fronts for the shell companies that they set up as asset protection for clients. Chris was about to come clean, and for that, his wife got kidnapped and he got killed, but Chris left a lot of evidence in a jump drive hidden in his dog’s collar.

This week, in the episode titled “Home of the Brave,” Tony DiNozzo’s (Michael Weatherly) father, DiNozzo Sr. (Robert Wagner) returns, and in the promo, he is warmly welcomed by Abby, McGee, and Bishop. Senior says that he has good news for them, and it turns out that he is trying to sublet Tony’s apartment. It looks like all three will be interested in Tony’s old place, and all of them will try to woo Senior.

Elsewhere in the episode, Torres breaks protocol when he learns a witness in an NCIS case is wanted by U.S. Immigrations and Customs Enforcement. In the promo, Torres looks upset as he tells Bishop that it could have been him in the man’s place, as the man in currently serving in the U.S. military.

'Rick and Morty' season 3 spoilers: Summer and Rick's ex-wife to...

'Fairy Tail' chapter 499 spoilers, news: Juvia to kill herself to...