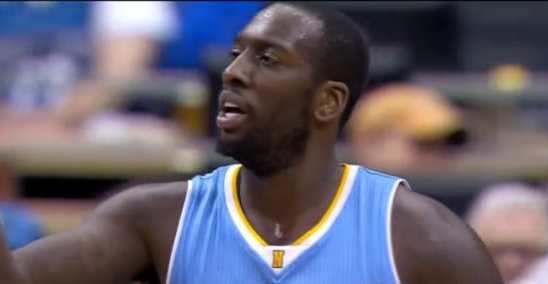 The Washington Wizards have signed 27-year-old forward J.J. Hickson from the Denver Nuggets.

In a press release posted on ‘Wizards Today‘ on MonumentalNetwork.com, Washington Wizards President Ernie Grunfeld made the announcement on Thursday. The terms of the deal, however, were not made public.

“Signing J.J. for the remainder of the season gives us another solid veteran who will bring more depth to our frontcourt. His experience, athletic ability and physical presence will be solid additions to our team as we continue our playoff push,” Grunfeld said.

Hickson was in the first round pick (19<sup>th overall) in the 2008 NBA Draft by the Cleveland Cavaliers, where he played for three years. After playing a brief stint in Israel, he was then traded to the Sacramento Kings, in exchange for Omri Casspi and a first-round pick at the 2012 draft.

Upon the expiry of his contract in 2012, the Portland Trail Blazers then signed him for one season, before the Denver Nuggets acquired him in 2013.

For the current season alone, the power forward/center has played in 20 games so far and is averaging 6.9 points, 4.4 rebounds, 0.6 blocks, and 0.5 steals through 15.3 minutes of playing time per game.

Meanwhile, the Detroit Pistons are adding a new name to their roster, albeit for a brief time only.

A second round pick (32<sup>nd overall) by the Cleveland Cavaliers in the 2011 NBA Draft, Harper jumped around in various teams and leagues throughout his career.

Harper has played in one game, so far, against the Philadelphia 76ers on Wednesday. Detroit went on to win the said contest with a score of 111-91.