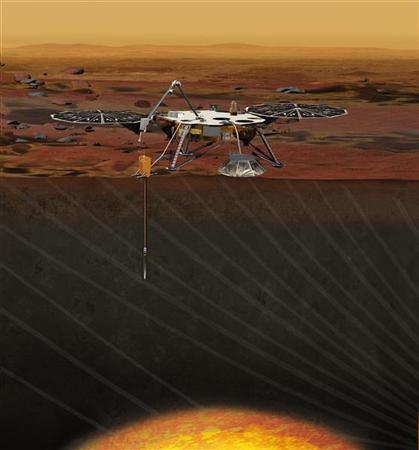 Technical issues with one of the main instruments to be used by the InSight robotic Mars lander would cause it to miss the launch window, which is scheduled only until March 30. Now, NASA officials are deciding whether to call off the mission altogether or wait until 2018, for the next launch window and spend millions again to successfully send it to Mars.

The issues stemmed from a French-built seismometer which was not ready by the time the lander should be launched. There were problems with the vacuum enclosure that surrounds and protects the detectors of seismometer. An extra $150 million would be needed to solve this problem and have it ready by the next launch window on May 2018.

Launch windows are times when the Earth and Mars are in perfect positions to allow for a robotic landers to arrive at the red planet. This happens only every 26 months.

“The launch window for InSight was to open this [March],” said Jim Green, head of NASA’s planetary science division, as quoted by Spaceflight Now. “Because of a very late delivery of an instrument, we recognized that we weren’t going to be able to make it, so we’ve had to step back and begin to re-analyze what are our next steps,” he added.

InSight stands for Interior Explration using Seismic Investigations, Geodesy and Heat Transport and is supposed to probe the surface of Mars and study its early geological evolution. NASA scientist hope to understand more about the formation of terrestrial planets, like Mars, in the solar system. The construction of the lander started in May 2014 with the initial testing done in May 2015. As of December 2015, over $525 million has already been spent by NASA for the InSight project, capping at $675 million. If the launch in 2018 will push through, NASA might have to cancel funding for other missions, which include setting up new interplanetary probes in the future.