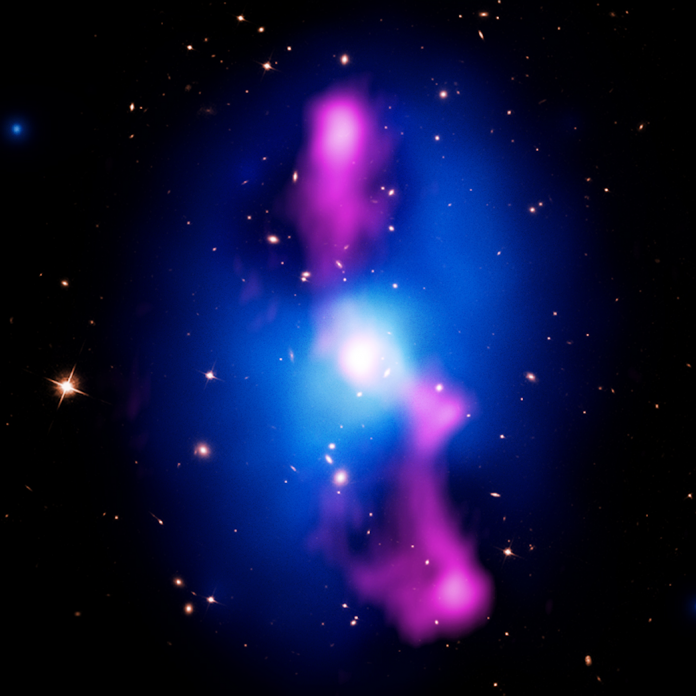 NASA recently released images of an explosion in space first seen in 2005, 10 years ago. The explosion was of astonishing proportions and may be creating a new universe.

NASA’s Chandra X-Ray Observatory detected radio waves emitted from cavities created by the eruption that came from a massive black hole at the center of the galaxy cluster MS 0735.6+7421, 2.6 billion light years away from planet Earth. These data were combined with optical data of “galaxies in the cluster and stars from the field of view” which were gathered from the Hubble Space Telescope. The super enormous eruption that created this galaxy cluster is said to have been second only to the Big Bang which created the Milky Way.

Metro quotes Brian McNamara of the Ohio University in Athens as saying, “I was stunned to find that a mass of about 300 million Suns was swallowed.” The black hole was so powerful that it consumed that much mass.

The pink glow in the image above shows huge cavities, each with a diameter measuring over 600,000 light years. Shown in blue are the images captured by NASA’s Chandra X-Ray Observatory which are actually that of hot gas that make up the bulk of the galaxy cluster.

These images are part of a collection of observations saved in NASA’s Chandra archives. Prompted by the celebration of American Archive Month last month, these photos were released. For 16 years, Chandra has been collecting data on space objects from all over the universe. Data are processed and stored but made available to the public for future access and study.

The explosion is believed to have been going on for more than 100 million years, so powerful as to have created a cloud of gas heavier than the Milky Way. And indeed, the explosion may still be going on, far, far away in the constellation Camelopardalis, the Giraffe.