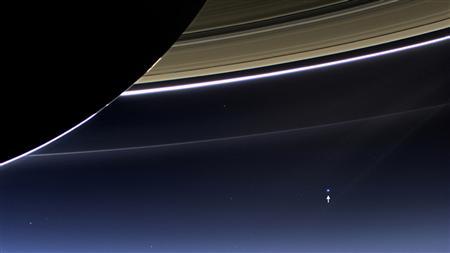 A scheduled flyby on Wednesday, Oct. 28, will be undertaken by NASA’s Cassini spacecraft on Saturn’s moon Enceladus in order to sample the icy plume that erupts from what is believed to spout from the moon’s underground ocean.

“On Wednesday, we will plunge deeper into the magnificent plume coming from the south pole than we ever have before, and we will collect the best samples ever from an ocean beyond Earth,” said Curt Niebur, Cassini program scientist at NASA Headquarters in Washington, D.C., at a news conference today where Space.com was represented. It will be the first time for Cassini to pass this low over Enceladus.

Last year, scientists’ interest was sparked when pictures taken by the returning Cassini spacecraft showed big geysers of water in Enceladus’ south pole, Air and Space Magazine reports. From that same journey, methane was also detected by Cassini’s instruments, which is a significant indication of the possibility of life.

The mission on hand makes it possible to study the sample, which will be taken from the Enceladus’ plumes, and determine whether the moon does have potential to host life. Enceladus, though small and icy, has stimulated much interest because it is active. It is about as wide as the state of Arizona, with a bright and smooth surface that is extremely cold with temperatures of ?330F, owing to the fact that Enceladus reflects 100 percent of sunlight that hits it.

Craters 35 kilometers in diameter are found in some parts, as well as corrugated terrain, fissures, and plains signifying that the interior may be liquid at this point in time, something that is quite unexpected. Enceladus is estimated to be 100 million years old.

Scientists and astronomers are closely studying Enceladus to understand its geological history and dig deeper into the processes that created its surface. Surface materials are also being studied in terms of composition and distribution.

Alzheimer's news: Alzheimer's disease could be caused by herpes and other...