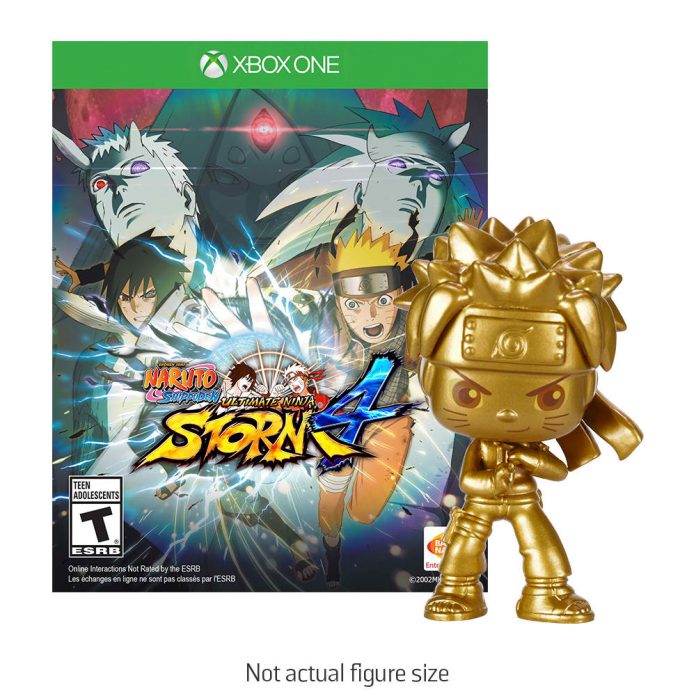 A new bundle package for the upcoming game “Naruto Shippuden: Ultimate Ninja STORM 4” has been revealed. Retailer GameStop is offering a new game bundle that includes an exclusive golden Funko Naruto figure that will never be sold anywhere ever again.

The “Naruto Shippuden Ultimate Ninja STORM 4” Limited Edition Golden Bundle is exclusively available at GameStop. The bundle will include the main game for either the PlayStation 4 or the Xbox One and an exclusive Golden Funko Naruto figure that stands at approximately 3 inches tall about the same size as other Funko POP! figures in the market. Aside from its special golden color, the Golden Funko Naruto figure also features a highly detailed facial expression of Naruto and a stance that is different from an ordinary Funko figure.

The “Naruto Shippuden Ultimate Ninja STORM 4” Limited Edition Golden Bundle can be pre-ordered for $64.99. Users who wish to buy just the game alone can also do so for a price of $59.99.

BANDAI NAMCO Entertainment also previously released a new trailer for the game, whihc showed the part of the game tahtd eals with the climactic Fourth Shinobi World War, and the most memorable and epic fights that had been part of it. It also detailed the new game mechanics that will be introduced in the new installment, including the Change Leader System, whihc allows players to switch between characters in beteen combos to deal more massive damage to the opponent; the Linked Awakening system, which simultaneously unlocks Awakening on all team members; the Costume Damage, which shows real-time battle damage to the character as the battle goes on; and Elemental Effects, which boosts and/or weakens attacks depending on the environmental surroundings of the battlefield.

“Naruto Shippuden Ultimate Ninja STORM 4” will come to the PS4, Xbox One, and PC. It releases on Feb. 4, 2016 for players in Japan, on Feb. 5 for the European region, and Feb. 9 for the rest of the world.