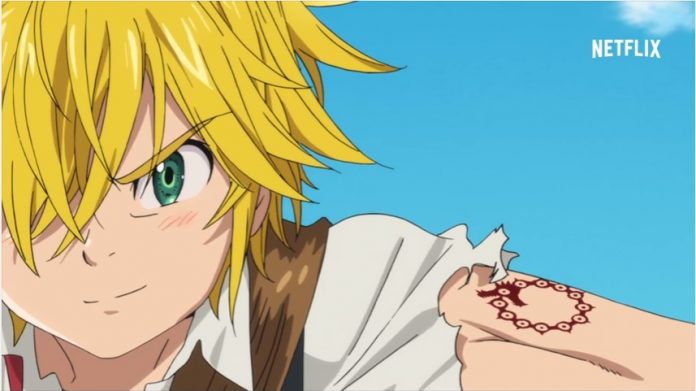 Nakaba Suzuki’s hit manga series, “Nanatsu no Taizai” or “The Seven Deadly Sins,” with its 187th chapter entitled “Ye Evil-Doers Be Smitten,” promises to pack a punch as the captain of the “Pleiades of the Azure Sky,” Denzel, is about to battle it out against Derrierie that would likely result in his death.

Fans might remember in chapter 186 of the manga series, members of the “Ten Commandments” namely Derrierie and Monspiet had commenced in doing their mission now that Estarossa and Zeldris were both out of the scene. Meanwhile, Gilthunder, Gilfrost, Howzer, and the immortal member of “The Seven Deadly Sins” Ban were busy warding off enemies from entering the castle. In the middle of the fight, some of the Holy Knights appeared together with some of the remaining townsfolks. Just as when they hurried them to get inside the castle for safety, the people began attacking them including the heavily armored knight.

They quickly came to an assumption that these people were under a spell and the members of the Ten Commandments were behind all this. Moreover, Derrierie and Monspiet appeared in front of them and ordered them to lower their guard and added that fighting them will be futile. However, Sir Denzel slowly walked out from a torn-down gate and faced Derrierie and Monspiet. As soon as Denzel unsheathed his katana, Derrierie felt a presence within the former’s weapon and was right in figuring that out as the so-called Goddess manifested herself ready for battle.

That being said, in chapter 187, it is speculated that Sir Denzel might be beaten to a pulp and eventually killed during his battle with Derrierie. In addition, there are also theories that the main protagonist, Meliodas will finally be revived and backed up by the Demon King’s spirit that is being contained inside his body. It’s also likewise rumored that Meliodas and Zaratras will be giving assistance to Ban and the rest of the Holy Knights in protecting the kingdom and eventually defeating Derrierie and the two other members of The Ten Commandments.

‘One Punch Man’ season 2 rumors: New season to premiere in...