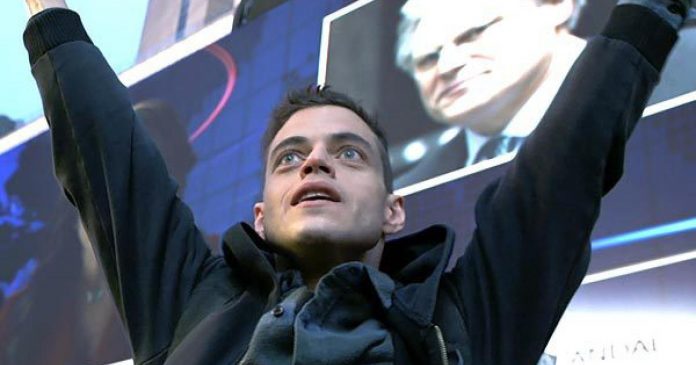 With the imminent arrival of Mr. Robot” season 2, fans are already on their toes trying to anticipate what the hacker-centric show will bring to the table this time around.

Over the course of the months leading to its comeback, creator Sam Esmail and the cast were generous enough in sharing some of the thematic elements for “Mr. Robot’s” second season. The trailers and teasers released also gave fans an idea of the broadening scope that the series will tackle, especially with fsociety’s hack on E Corp blowing up and affecting the entire nation. Given the show’s penchant for jaw-dropping twists, even with the synopsis at hand, it is still difficult to predict where the series will bring its audience this time.

“This show asks you to step out beyond the monitor and take a look at the world around you,” Rami Malek told Zap2it about the show’s interesting premise. The 35-year-old actor plays socially anxious hacker Elliot whose hallucination of his dead father affects his day to day decisions. It is no secret that the show, who broke into mainstream consciousness last year, has opened a lot of doors for Malek. Chalk it up to his impressive embodiment of the character and his penchant for taking complicated roles such as Elliot.

“In the breakdowns, I’d always just look for someone quirky or weird that’s what I’m going to go in for, surely,” Malek divulged in a separate actors’ roundtable with The Hollywood Reporter. “I resented it for a while, and then I thought, ‘This is something to be proud of, that you can be that kind of outsider in anything.’ But at first I was like, ‘Here we go again.'”

Malek will be delving deeper into Elliot’s world as season 2 of “Mr. Robot” is expected to take on the character’s backstory. Moreover, a brewing internal battle between him and Mr. Robot is also expected go down in the forthcoming installment, which will make things much more complicated.