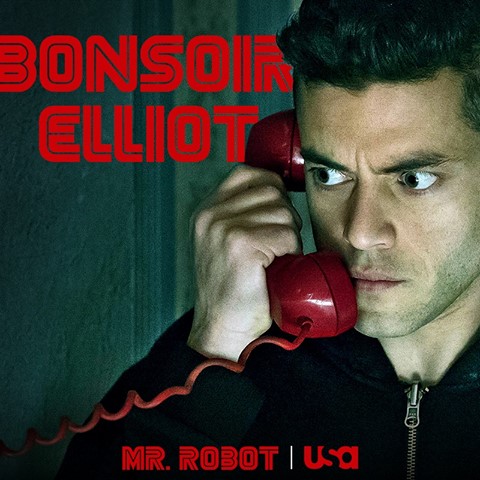 Elliot (Rami Malek) will be seeking the help of a new individual to get rid of Mr. Robot (Christian Slater) in the brand-new installment of USA Network’s “Mr. Robot” season 2.

Titled “eps2.2_init_1.asec,” episode 4 will see the dissociative identity disorder-suffering hacker befriending Ray (Craig Robinson) as he hopes that the latter can finally delete Mr. Robot from his mind. Meanwhile, Agent Dom (Grace Gummer) makes a new discovery as Darlene (Carly Chaikin) wonders who’s the bigger threat from two groups that going after them the FBI or the Dark Army?

In the promotional trailer, Ray advises Elliot, “Wanna get rid of the battle within? Make peace with the enemy.” On the other hand, Mr. Robot reveals his side of the story as he tells Elliot, “You think I want this? Two-halves of a perpetual war?” He then suggests that they should try to settle the score once more, “One game and the winner takes all.”

Phillip Price’s (Michael Cristofer) voice can be heard in the background stating, “I did not start this game. You did,” as he laughs maniacally. Elliot turns to his alter ego, seemingly worried that he might lose. Mr. Robot then tells him that if he wins, “I get to be in charge, once and for all.”

Meanwhile, some members of the cast such as Malek, Slater, Gummer and Portia Doubleday recently attended San Diego Comic-Con in California. During their panel, the stars teased what’s in store for the rest of the season.

Malek revealed that his character is still haunted by the love of his life Shayla (Frankie Shaw) who met her demise in the freshman run, “He feels that he might be responsible…one day down the line, it will fly in the face and break him. Elliot has that tendency, but he always gets back up.”

Moreover, Doubleday shared that her role as Angela will have an arc that no one will be able to predict. Referring to the confidence-building exercise that Angela is putting herself through in the first installment of the sophomore season, “There’s something dangerous to be said about her obsession with these affirmations. What this is stemming from, is something quite explosive.”