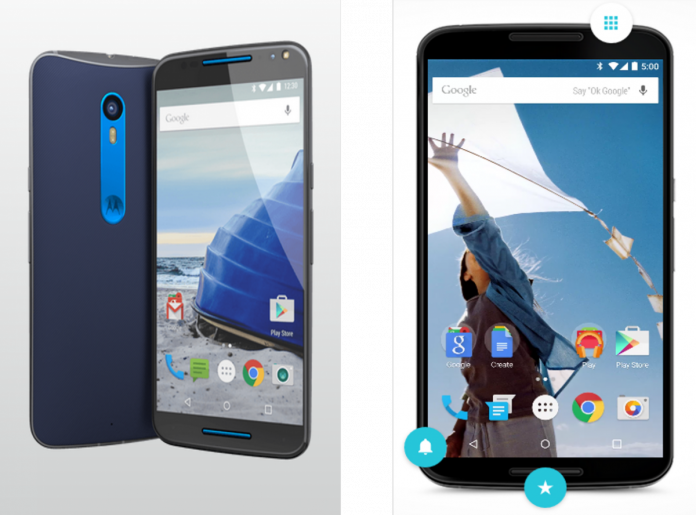 How does the newly released handset from Motorola – dubbed “Moto X Pure Edition” or “X Style” for regions outside the Unites States – compare to last year’s Google Nexus 6 as they are both designed by the same company?

The display sizes are almost the same, Moto X has 5.7-inch screen IPS TFT LCD while Nexus 6 has 5.96-inch screen in high quality AMOLED display. The resolution for the former is quite lower at 1440×2560 pixels with 520 pixel-per-inch density while the latter has 2560×1440 pixels and 492ppi. Both are covered with Corning Gorilla Glass 3.

One of the main differences can be found in their cameras. Moto X has a stunning 21-megapixel main camera that includes f/2.0 aperture, 4x digital zoom and various settings including Phase Detect Auto-Focus, Closed loop processing, Color Correlated Temperature flash with dual LEDs, Quick Capture and many more. It can also record at 1080p HD quality at 60 frames-per-second or 4k video at 30fps and even with slow-motion. While the selfie-taker has 5-megapixel wide-angle lens that boats f/2.0 aperture and 1.4um pixel for low lighting.

On the other hand, Nexus 6 has 13-megapixel back lens that only has Dual LED ring flash and can capture 4k video at 30fps. Its front-facing lens is only 2-megapixel and can be used for HD video conferences.

The RAM for Moto X is at 3GB with three options for built-in memory 16GB, 32GB or 64GB all expandable via a MicroSD card. While Nexus 6 has 32GB and 64GB storage capacity.

Another differentiating feature is the advantage of Moto X to have the back cover customized according to the user’s personal choice of design. Nexus 6 is only offered with either cloud white or midnight blue colors that are made with matte plastic.

When it comes to prices, Moto X starts selling at $399.99 while Nexus 6 is currently rolling with fifty percent discount for $349.99