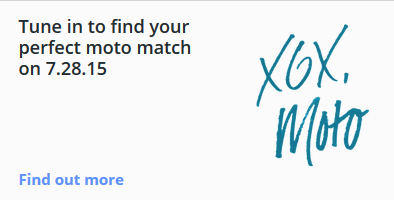 Motorola is busy hyping up its customers for the announcement for the third generation Moto X lined up next week. In the invitation sent out last week for the events in New York City and London, the message indicates “Your Relationship is about to Change” along with a hugs and kisses cursive that looks like X G X. Is Motorola possibly hinting about the devices it will release on July 28?

Speculations indicate that there will be three devices expected next week. Among the predictions are that there will be one Moto G and two Moto X devices or one Moto X and two Moto G handsets. However, if the hugs and kisses cursive indeed is a cryptic X G X, then it is more likely that the new devices will comprise of the former prediction, rather than the latter. Certainly, one of the Moto X indicated here is the third generation Moto X, following the first two variants released in 2013 for the 1st Gen and 2014 for the 2nd Gen.

The third generation Moto X is anticipated to have a 5.2 inch screen display with a 1440×2560 pixels at 565 pixels per inch. It may run on an Octacore processor and a Snapdragon 808 or 810 chipset with 4GB RAM. Its internal storage is expected to be around 32GB to 64GB with an option to expand through micro SD. For its camera, the front shooter is predicted to come in at 5 megapixels while the back camera will come in 16 megapixels with optical image stabilization. Its battery is also expected to be upgraded from the 2nd Gen version at 3280 mAH, while its operating system is speculated to run on Android 5.1.1 Lollipop.

The specs of the other Moto X handsets are still unknown, but some say that it may follow the pattern of Samsung and Apple where the other device is bigger. With this, the other Moto X may sport a 5.5 or 5.7 inch display screen and may be called Moto XL or Moto X Sport. Very little detail is said about Moto G but one prediction that stood out is that it is potentially for the mid-range market because it may not have a Wi-Fi 802 11 ac. It is either a customization of Moto E and Moto G or the third generation version of the Moto G second gen.

Although everything is a rumor, the upcoming announcement is surely an event to watch out for.