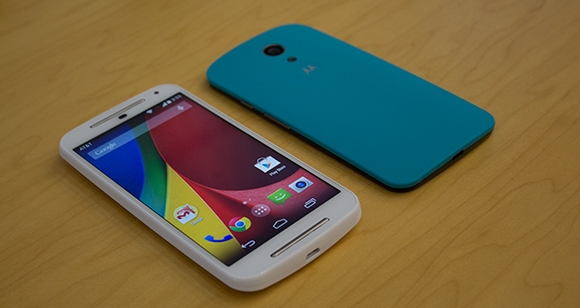 Motorola may be gearing up for the release of two new handsets next month under the Moto G lines.

Motorola is expected to release two new devices next month in two variants under its G series. Ars Technica was able to get a preview of the photo leaks circulating the internet under the names Moto G4 and Moto G4 Plus.

In the leaked pictures, it can be seen that the company has decided to do away with the speakers at the top and bottom part of the device and replaced it with a square button at the bottom for the fingerprint scanner.

On the other hand, the back panel of the upcoming handsets include a space for a camera with dual LED flash, with another button or hole that may be used for something that they are planning to introduce along with the launch of the new Moto G series.

The devices may likely follow the trend in the industry today where one is a phone type  while the other is a phablet variant. Other speculations regarding the specifications of the devices include a possible Qualcomm Snapdragon 820 chipset, similar to the processor that most competitors are opting for.

In addition, the upcoming Moto G handsets may come with 3GB of RAM and at least the Android Marshmallow out of the box. It may also introduce a camera that has the color spectrum sensor like what LG introduced. Cost-wise, the devices may range around $270 to $320.

Meanwhile, the naming convention of the upcoming Moto G devices may be redundant and confusing with LG’s flagship last year, the LG G4. However, Moto G4 and Moto G4 Plus are likely called as such to refer to these as the fourth generation of the Moto G series.

No word has been announced by Motorola yet, but the upcoming handsets are speculated to be coming in May.