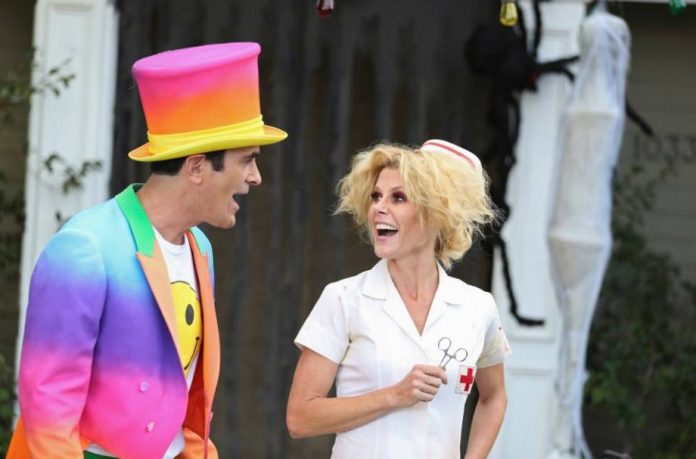 Phil was invited to do a real estate segment for the local news and when he tried to do his own makeup, Haley (Sarah Hyland) suggested that maybe she should do it for him. At the station, the duo meet smarmy Rainer Shine and Phil was thrilled to finally meet him in person. Phil wanted him to be his new best friend and he asked the weatherman if he wanted to grab a beer.

It looked as though the two were getting along but things got awkward when Rainer kissed Haley. Phil reprimanded his friend for what he did but regretted his actions later. Haley told Phil to go to Rainer, and after Phil apologized, the two made up and continued their friendship.

Meanwhile, Manny recorded an homage to “Hamilton” as his application to Juilliard before finding out that the internet was full of tributes to the hit musical, and most of them were college applications. Jay (Ed O’Neill) offered to help him and said that he should talk about his difficulties about growing up as a child of immigrants. In the end, Manny decided to tell the truth about his childhood in the video and talked about Gloria (Sofia Vergara) who raised him on his own and his stepfather who made his way into the world by starting his own business.

“Modern Family” returns on Oct. 26 with a special Halloween episode titled “Halloween 4: The Revenge of Rod Skyhook.” In the episode, Luke (Nolan Gould) realizes that his Halloween party isn’t the crazy bash that he dreamed of and is in danger of becoming the worst party of the year. Sensing that Luke is in trouble, the Dunphys come to his rescue and arrange for Rod Skyhook to visit the party.

Elsewhere in the episode, Cam (Eric Stonestreet) goes head-to-head against his Halloween rival, while Lily (Aubrey Anderson-Emmons) and Mitch (Jesse Tyler Ferguson) try to keep him from going over to the dark side. And when Jay learns that Manny is going to a party at the home of an old nemesis, he enlists him to deliver a prank that his enemy will never forget.