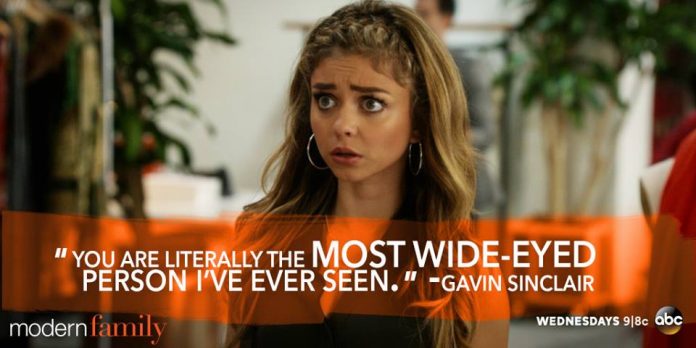 Known for her role as the cute and stylish Haley Dunphy in the family comedy sitcom “Modern Family,” Sarah Hyland’s star is shining brightly. She never missed Screen Actors Guild Awards (SAG) that is, until this year’s event due to poor health.

The 26-year-old actress shared her sentiments on her Instagram post prior to the awards night. With a photo of her and beau, Dominic Sherwood, during last year’s SAG event, Hyland told her over four million followers, “Sad to say I will not be attending the sag awards today for some health reasons.”

The lovebirds were spotted earlier this month walking hand-in-hand in West Hollywood.

In a recent report from Daily Mail, Hyland was photographed on the set of “Modern Family” on crutches. In spite of what looks like an ankle injury, the young actress has managed to wear heels while the cameras were rolling. In one scene, she was with Jesse Tyler Ferguson, who plays Mitchell Pritchett, pushing a car.

Meanwhile, the posh, bright-eyed actress is the new face of Candies. Hyland, who is also the creative director, proudly displays her very own spring collection.

“I like that it has a little bit of me in everything,” Hyland told E! News.

“There’s a certain denim overall dress I helped design that’s going to have a package with it, almost like a time capsule package. It comes with pins that may or may not have a little shout-out to personal things in my life. All the details are very, very important,” she added.